Most people don’t think to eat prawn shells, but they are edible. There is nothing dangerous or toxic about them. Some might argue that they don’t taste particularly great, but that doesn’t mean that you can’t eat them.

In fact, in some countries, people DO eat prawn shells.

Other people will suck on the prawn shells to get the juice or flavour out of them.

What Are Prawn Shells Made From?

The material that makes up prawn shells is also what creates a vast number of other things in nature, including the exoskeletons of various insects, the shells of crustaceans, and even the web of a spider!

The material is called chitosan, it is technically a sugar, and you can buy it in various formats in health food stores. It is also an ingredient in many different medications.

Some recipes include prawn shells as a way of adding more texture and flavour to a dish, and also for the supposed health benefits, but western recipes tend to call for a shells-off approach.

Leaving the shells on, along with the head and tail, is a faster way of preparing and cooking the seafood. It also reduces the amount of waste you produce when cooking with prawns.

All parts of the prawn are considered edible in a sense that they likely won’t cause you harm when you eat them. 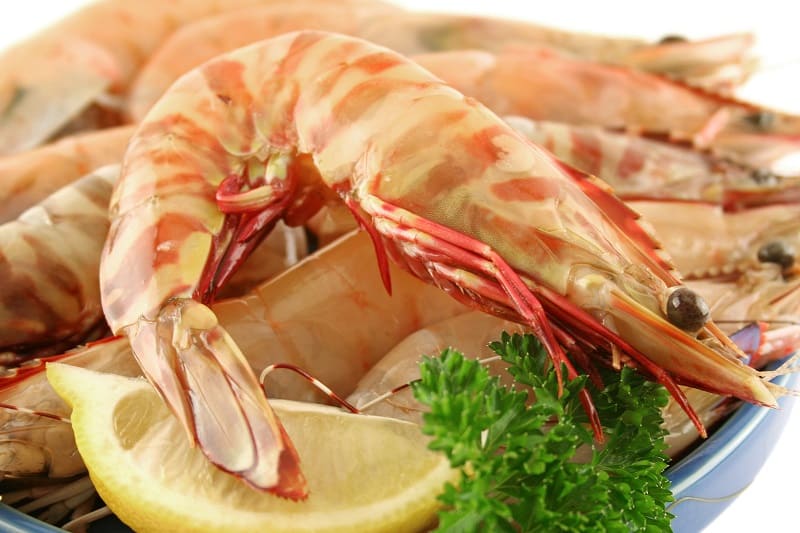 Can You Get Sick if You Eat Prawn Shells?

If you are allergic to seafood or shellfish, yes, eating prawn shells can make you sick, just as eating the flesh of the animal.

A shellfish/seafood allergy can be life-threatening, so it is not advisable to try prawn shells if you’re not sure of your allergy status.

Most people without an allergy to prawns/other seafood can eat the shells without any concerns.

With heat, the shells themselves become much more brittle and easier to break down.

Some parts of larger prawns and types of seafood, such as the tail, can pose a choking hazard, particularly in young children.

How to Cook and Eat Prawn Shells

Much in the same way as traditional soft-shell crab dishes, you can simply cook the prawns in their shell and then eat them whole.

Eastern cuisine regularly features prawns still in their shells, fried. It is still recommended that you de-vein the shrimp before consuming, however.

Broth or stock can be made with the shells of prawns, too, much in the same way as you’d create stock or broth with animal bones such as chicken or beef. The prawn shells are said to add a deeper, heartier flavour to the fluid.

Using the shells to make stock or broth also allows you to get the most out of the animal before disposing of the waste/leftovers.