When you’re buying a new oven, it is always worth exploring your options. Choosing the right oven for your needs usually comes down to fuel type, capacity, and initial cost.

Running costs, however, are also worth considering. While oven running costs are unlikely to break the bank, the cost of running certain types of ovens can be quite shocking. So, let’s find out if gas ovens are cheaper to run than electric ovens, shall we?

Are Gas Ovens Cheaper to Run than Electric Ovens?

On average, gas ovens cost about 6p to run per kilowatt-hour (kWh). Electric ovens, on the other hand, cost 14p per kWh (source). So, gas is cheaper to run than electric.

In fact, if you were to use your oven for five hours a week every week of the year, a gas oven would cost about £20 per year. An electric oven, though, would cost about £40 per year. Granted, these savings aren’t massive, but they do add up over the lifespan of an oven.

The overall estimated annual running costs of an electric oven come in anywhere from just under £40 to about £53, depending on how much you use it. The cost of running a gas oven annually comes in at between £15 and £20, depending on usage.

So, the clear winner based on usage costs is gas. Gas is much cheaper to run than electric. However, this doesn’t mean that a gas oven is a right oven for you.

For example, if you don’t have a gas hook-up for your oven already, the cost of having one installed will likely be higher than any of the savings you’ll get from the oven.

You also need to factor in which oven you prefer to use. Some people swear by gas, others swear by electric. I can say from experience, having owned electric ovens all my life, that switching to gas in my first ever rented property was a big learning curve.

There is no doubt that gas ovens are brilliant tools, but many of us prefer electric.

Electric ovens are typically a bit cheaper to install, and the initial cost is often cheaper than a gas oven. They also cook with dry heat, so they are much better for baking and roasting (although many gas fans will argue this case). 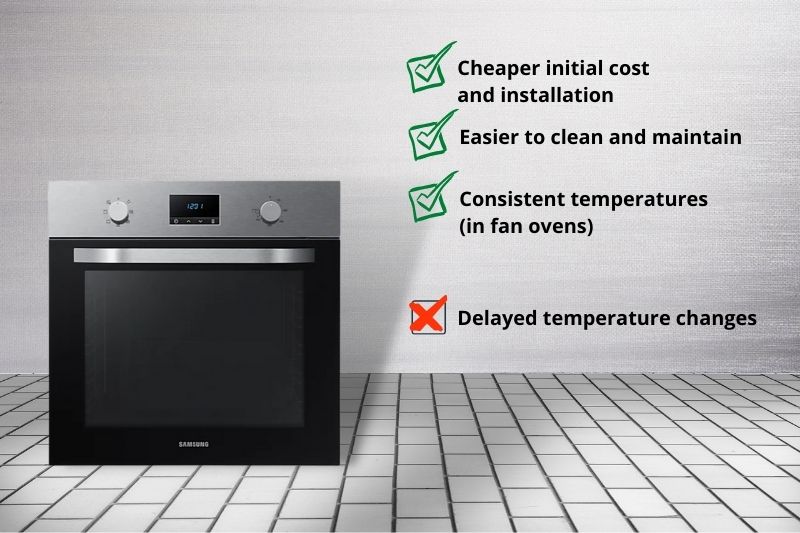 Most electric cookers also have fans nowadays. While these play into the running costs being higher, the temperature in the oven is much more stable and consistent, so food cooks more evenly. Electric hobs are also much easier to clean than gas hobs.

Of course, electric ovens do heat up a lot slower than gas ovens. In general, they take about 10 minutes longer to heat up than gas ovens. They are also much less responsive to temperature changes as well.

Gas gives you much more control than electric. You can really dial in a temperature on a gas hob or oven, and it responds almost instantly. 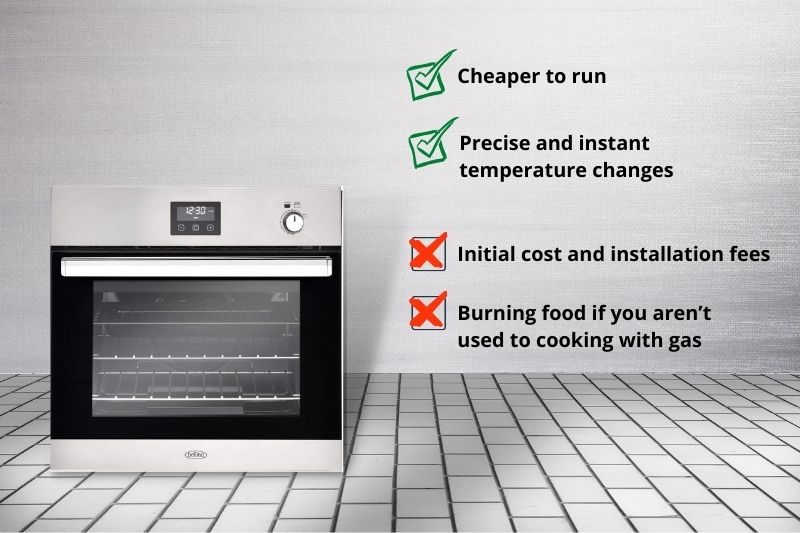 Gas is less forgiving than electric, though, so burning your food is very easy to do in a gas oven. Gas cookers also tend to be a bit more expensive to buy and install than their electric counterparts, but budget gas cookers are available.

Safety is another concern with gas, of course, but all gas ovens have strict safety guidelines they must adhere to, so safety isn’t something that should factor into your decision too much.

The Pros and Cons of Gas Ovens

The Pros and Cons of Electric Ovens

As you can see, both gas and electric ovens have their pros and cons, and it is really up to you to decide which fuel type you’ll prefer.

Yes, gas is certainly the cheaper of the two ovens to run, and you could save some money each year by buying a gas oven. However, it ultimately comes down to which oven you prefer to use.

We hope this look at which type of oven is cheaper to run has helped you decide which oven you’ll buy next. If you want to see the best gas or electric ovens available in the UK right now, please explore Chef’s Pick further.