An electric double oven is an obvious choice for both large households and adventurous cooks alike. Its unique selling point is that it will provide you with a flexibility over your cooking that a single oven will not.

So, if you’re thinking of investing in one, and would like some guidance on the best electric double ovens available in the UK, read on… 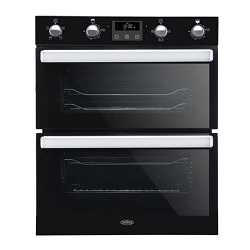 This ultra-modern-looking Belling BI702FP is a great choice for those with a chic, contemporary-style kitchen design. And to top it off, it’s very reasonably-priced.

The top compartment is a fan oven, which is great for temperature distribution, and the second oven comes with a handy grill setting.

This cooker was built using Equiflow technology, meaning the hot air inside distributes with full evenness. And its enamel coating makes it easy to keep clean and shiny.

It doesn’t come with a grill handle, which is a source of annoyance for many users, but overall, this oven is a very well-liked, popular choice. 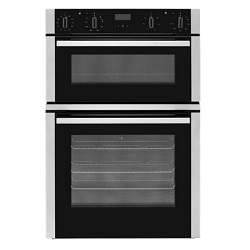 A little higher in the price range than the Belling BI702FP, the NEFF N50 U1ACE5HN0B built-in electric double oven has a spacious lower oven with three shelves, and an upper grill section; both of which are roomy, and would suit those with multiple mouths to feed. It also features an LCD touch display, making it perfect for modern tech lovers.

Monitoring your handiwork while cooking is also easy, as it comes with telescopic shelf runners, which glide in and out smoothly.

If cleaning your oven isn’t your idea of a good time, this may be a good option, as it comes with catalytic liners that absorb greasy splatters and spillages, and then oxidises them when the oven is in use.

Reviews praise it for heating quickly, which isn’t always the case with electric ovens. As with the Belling, a consistent gripe from users is the lack of grill handle. 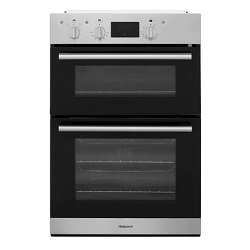 This Hotpoint oven features a conventional oven on the bottom compartment, meaning the heat rises inside while in use, making it particularly ideal for baking.

With its black and stainless-steel design, this oven will look perfectly at home in a modern style of kitchen.

This double oven is on the lower end of the price scale, so it is a good option for those shopping on a budget. And again, with catalytic liners, it is an easy oven to keep clean.

It comes with a useful setting that turns itself off when your food is ready, which is a handy feature for those prone to “over-colouring” their food and/or setting the smoke alarm off!

A notable user gripe is that it would benefit from a drip tray from condensation on the inside of the door while in use. 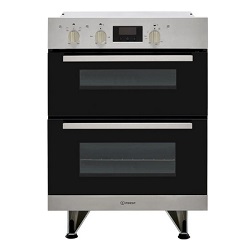 This stylish stainless steel Indesit Aria IDU6340IX features a nifty set of legs, which makes cleaning the area under and behind the oven easier than with other built-under cookers.

As it is in the lower price-range, it would suit first-time buyers, or those looking to kit out a property on a budget.

The key issue with this oven is that the main oven area only contains one shelf, meaning it might not be the best choice for larger households. 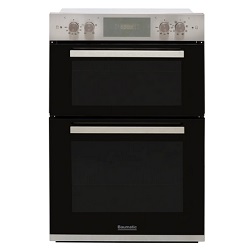 Ultra-modern in design, this Baumatic BODM984X certainly looks snazzy, and is in the lower price bracket, so could be a good option for young couples kitting out their first house.

The user reviews of this product are mixed. Many users can’t fault it, but others have complained of a bizarre new-cooker smell that is overpowering and can last up to a week. Other reviewers have complained that the grill pan on the top oven compartment is a poor fit, and doesn’t slide in and out smoothly.

This oven only comes with one shelf per compartment, which may be worth bearing in mind for larger households. 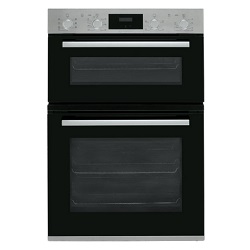 This oven is a little more expensive, and its energy rating is A/B, meaning your utility bills may be slightly higher than that of an oven with an A/A rating.

Most users consider this oven great value for money. A common gripe appears to be that the fan is rather noisy! 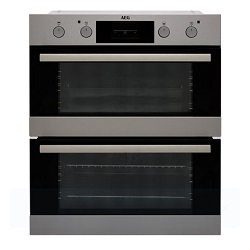 This is another multifunctional oven, so it’s a great choice for those cooking multiple items at a time. This oven’s energy rating is A/A, so it’s very energy efficient.

It boasts a SurroundCook feature, which evenly circulates heat throughout, so your food will be cooked thoroughly, regardless of what level it’s on.

The fan in the oven is relatively quiet.

A common gripe is that the timer is very quiet, and that the digits by the dials are small and hard to read.

Double ovens can either be built-in at eye level, or built-under your counter unit. Before purchasing either option, make sure you measure the width and depth space of your designated kitchen area. If you want your oven to be a part of your work space, you’ll need to opt for a built-under.

Can You Use Both Ovens on a Double Oven at the Same Time?

Of course. This is the main selling point – that both compartments can be used at the same time, and at different temperatures; making it a nifty tool for those who are on Christmas dinner cooking patrol!

What Are the Advantages of a Double Oven?

Double ovens give you more flexibility when cooking meals with multiple components, and can be a great choice for those who regularly host. And because of the general evenness of heat distribution, they can be wonderful for cooking baked items, such as bread or cakes.

You can also use the bottom oven compartment as a hot-hold by keeping it at a low temperature to store recently-cooked food.

Double ovens can come in an option of built-in or built-under, so regardless of your kitchen layout, you will likely find one ideal for your home.

If we had to choose our double oven of choice, we’d absolutely opt in for the Belling BI702FP Built-Under Electric Double Oven. It’s super stylish, modern, boasts excellent heat distribution, and is great value for money.