Many of the most popular ovens sold in the UK are built-under double ovens. This means that they are designed to fit neatly under your kitchen worksurface and have two oven cavities, allowing you to cook at two different temperatures at once.

This makes them quite versatile and good for cooking more complex dishes or preparing different food for different members of the family.

In this article we’ll look at some of the most popular and highly rated built-under double ovens on the market right now, and explain more about what double ovens are, whether or not you should choose one and what to look for when making a purchase. 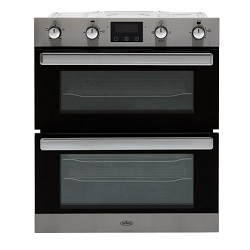 The BI702FPCT is a well-made built-under oven from respected British brand Belling.

When it comes to price, the Belling BI702FPCT is mid-range. It’s not the cheapest oven on the market, but it certainly isn’t the most expensive either.

If you want, you can connect this oven to your smartphone via Bluetooth to give you control over baking or cooking times without having to touch the oven itself.

This oven is quiet, even when the fan is running. It’s easy to use and is built to last.

One downside is that the markings on the temperature dial go up by 50 degrees at a time, so it can be hard to set exact temperatures. If you’re a keen baker and need to set your oven temperature very precisely it might not be ideal, but for everyday cooking it’s a great choice. 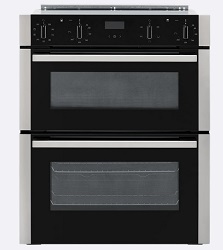 The NEFF N50 J1ACE2HN0B is a stylish, attractive oven with a classy stainless-steel finish. It’s relatively expensive, but is very highly rated by users.

This oven has two cavities. The main oven cavity is a fan oven which distributes heat evenly, making it ideal for baking. With a capacity of 47 litres, it’s relatively small.

The second cavity has a capacity of 34 litres and is a conventional oven with an extra grill function.

The interior of both oven cavities is lined with grease-proof enamel, which makes it very easy to clean.

One nice design function is that you can fully slide baking trays out to check on them.

Depending on how your kitchen is configured, this oven could go underneath a work surface or be installed at eye level. 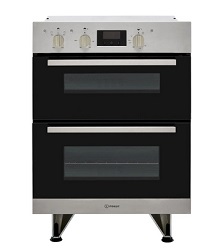 The Indesit Aria IDU 6340 IX is an inexpensive built-under double oven with a stylish stainless-steel finish.

Like many ovens on the market today, the Indesit Aria IDU 6340 IX has a grease-proof enamel coating on the inside which makes it very easy to clean.

This oven comes with feet, which are optional and can be easily removed.

This oven offers great value for money, and is generally very highly rated by users. There isn’t much to complain about, though one minor downside is that there is only one tray included for each oven. 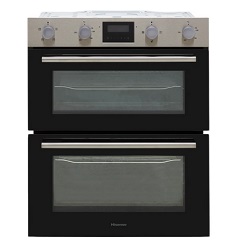 The BID75211XUK is a mid-priced double oven from Chinese brand Hisense. The 54-litre capacity main oven is a fan oven, which ensures the heat is distributed evenly. The smaller second oven is a conventional oven with a built-in grill.

Some of the Hisense BID75211XUK’s features include a programmable timer, which means you don’t need to worry about remembering to switch the oven off, and a child lock to help prevent kids from accidentally turning the oven on.

Like most ovens these days, the Hisense BID75211XUK has a grease-proof enamel lining on the inside, which makes cleaning the oven as simple as wiping it down.

One downside to this product is that the grill pan doesn’t have a handle, so you will need a good pair of oven gloves! 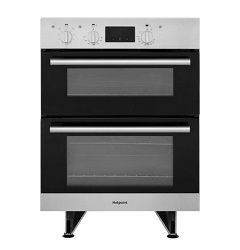 The Hotpoint Class 2 DU2540IX is a very reasonably priced double oven from a well-known brand.

The main oven is a fan oven with a capacity of 59 litres, making it relatively large for a built-under double oven. The fan is fairly quiet, unlike some fan ovens which can be very noisy.

The second oven is a conventional oven with a handy grill function for making toast or grilling sausages.

The Hotpoint Class 2 DU2540IX comes with feet, which can be removed if you prefer. It’s designed to go under a work surface rather than at eye level.

This oven offers great value for money, is easy to use and is well made, as you’d expect from Hotpoint.

Things to Consider When Shopping for a Built-Under Double Oven

Here are some things to think about when purchasing a built-under double oven.

Do you definitely want a built-under oven?

Is the main cavity big enough?

One of the main disadvantages of double ovens is that neither of the two cavities is as large as a single oven. If you need to cook large dishes such as roasts, look for a double oven with a large main cavity.

Do you have enough space?

Make sure you measure the space in your kitchen before ordering an oven. Built-under double ovens usually measure about 59.5 cm wide x 55 cm deep x 72 cm high, and fit in a standard kitchen appliance space.

What is a double oven?

A double oven is simply an oven with two different cooking spaces, or cavities. Each cavity can be controlled independently, so you can cook things at different temperatures, or just use one of the cavities if you’re cooking something small.

What is a built-under double oven?

“Built-under double oven” refers to double ovens designed to fit under your kitchen countertop. They usually measure slightly less than 60 cm wide by 60 cm deep, which is the standard size for kitchen appliances and means they will fit under the average kitchen worksurface. Built-under ovens are a type of integrated oven, in contrast to electric cookers that feature a hob as well.

Is a single or double oven better?

This all depends on your cooking habits. Here are a few things to think about.

Are built-in ovens the same as built-under ovens?

No, built-in ovens are designed to be positioned at eye level, whereas built-under ovens go under the kitchen countertop.

Can you use a built-in oven as a built-under?

No, built-in ovens are usually too tall to fit under the kitchen work surface without the door hitting the floor as you open it.

Kitchen countertop in the UK are usually 90 cm high. Built-in double ovens are usually 88 cm, so if you fitted it under a countertop the door wouldn’t be able to open properly.

Do built-under ovens have feet?

Some built-under ovens come with feet, while others don’t. Product descriptions on retailer websites usually state if an oven comes with feet.

What’s the difference between class 2 and class 4 ovens?

Ovens from Hotpoint have a class number, the most popular of which are 2 and 4.

This doesn’t have anything to do with energy efficiency classes, which are denoted by letters and plus symbols, for example A+. It doesn’t refer to the appliance class either, which is used to differentiate between what protective-earth connection different electrical devices need.

Instead, the classes appear to simply be a naming convention created by Hotpoint to refer to the quality of the product. The higher the class number, the higher the price. Therefore, a class 4 oven is one that Hotpoint believe to be higher quality than a class 2 oven, and it is therefore more expensive.

If we had to pick just one built-under double oven to recommend it would be the Belling BI702FPCT. It’s one of the most popular products on the market, and is highly rated by buyers. It’s reasonably priced, looks stylish and is easy to clean.