If you’re desperate to make a cup of tea, but somehow only have sparkling water to hand, you’ll be happy to learn that, YES, you can boil sparkling water.

There are a few things that you should probably know beforehand, however.

What Will Happen if I Boil Sparkling Water?

If you boil sparkling water, you will literally boil the bubbles right out of it. The carbonation process is essentially reversed, and the water will be still, not sparkling.

Boiling sparkling water can have some other effects, though, depending on the type of water you’re using.

Anything with flavours or additional sweeteners in it may still retain some of that taste once the boiling process is complete, which can then come through in your cup of tea, coffee, or whatever else you decide to create with your boiling water.

Carbonated drinks are made with carbon dioxide, and when the carbon dioxide in the drink reacts with water during the boiling process, carbonic acid is present as a result.

Boiling the sparkling water (or carbonated beverage) will remove the bubbles, but it won’t remove the carbonic acid.

The acid itself can alter the taste of the water, making it actually taste acidic or bitter.

The longer you boil it, the more prominent the acidic, bitter taste is likely to be. Once again, this will have an impact on your hot drink or food.

Some sparkling waters can contain additional vitamins or minerals, such as sodium sulphate, potassium, magnesium sulphate and calcium carbonate. These will also be present in the still water, post-boiling, and can even become more concentrated. 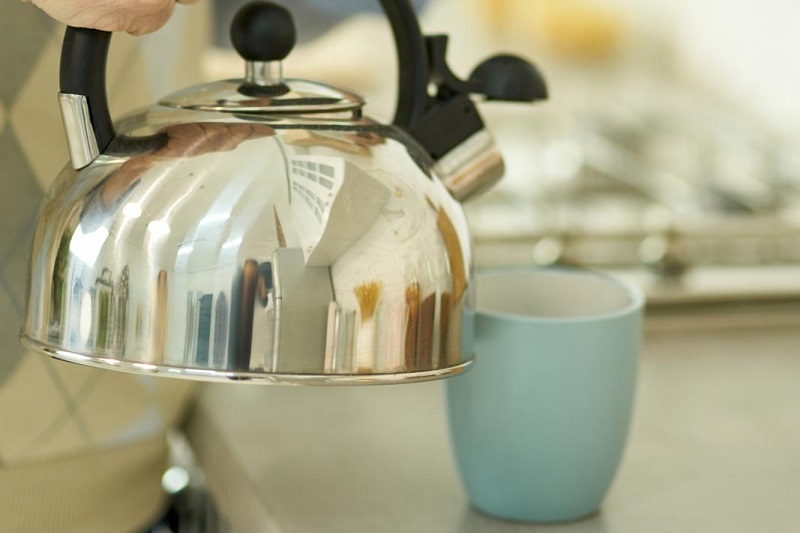 Will Sparkling Water Explode if I Boil It?

No, sparkling water will not explode if you boil it. All that will happen is, the water will heat up, the carbon dioxide will be released into the air, and the water will return to its flat/still, pre-carbonated state.

Are There Any Benefits to Using Boiled Sparkling Water?

In reality, no, there are no added benefits to be had from using boiled sparkling water to make your hot drinks or food items. In fact, the only thing it is likely to effect is your bank balance.

Unless it is fortified with additional minerals and vitamins (and your body actually needs them), you are simply wasting your money.

There are a few recipes that specifically call for sparkling water over still water.

Japanese dishes made with tempura batter is sometimes made with sparkling water to give the batter an airier, lighter texture, and more crunch. The bubbles help to make this happen.

You may also notice some dessert recipes calling specifically for sparkling water instead of still water, especially those that require either frying or baking.

For the same reason as with tempura batter, waffles, various cakes, crepes/pancakes, etc. usually have a soft and light consistency when they are created with carbonated water.