If you don’t have marzipan, or you don’t like marzipan on your cakes, you can still create cakes that have royal icing, such as festive Christmas cakes.

These often call for a layer of marzipan to help seal the inside cake, which can often be quite oily (such as Christmas cakes), as well as giving the royal icing or other decorations on top something to adhere to.

One of the best marzipan substitutes when you want to ice a cake with royal icing is fondant icing, but you may need to tweak the cake preparation process slightly.

How to Ice a Cake with Royal Icing Without Marzipan

You do have a number of different options open to you when you want to ice a cake with traditional royal icing but don’t have (or can’t use) marzipan.

Why not try some of these alternatives and substitutes:

You can use fondant icing in the place of marzipan. For the most part, royal icing will adhere nicely to the top.

You may need to leave fondant icing for a few hours to dry out a little before using it, but you would need to give marzipan sufficient drying time, too.

Option 2: A layer of apricot jam

If your cake or baked good permits, use a layer of apricot jam to do the job that marzipan is supposed to.

It is recommended that you first heat up the jam, and then force it through a sieve to ensure that has a glue-like consistency and isn’t full of lumps. Once you’ve done that, add an even layer of the smooth jam to effectively seal the cake.

You can then add royal icing over the top, without worrying about the colour bleeding or the high oil content of the cake potentially interacting with the icing.

You would use melted chocolate in the same way that you would use apricot jam in place of marzipan: first melt the chocolate, then add it to the cake so that it seals and works as an adhesive for the royal icing over the top.

In theory, the cake would also work to prevent any colour bleeding, and could be flavoured or coloured (with food-grade colouring) to suit.

You can buy packets of icing that is ready to roll. You unwrap it, roll it or mould it, and then place it on top of the cake as required.

Butter icing, also known as frosting or buttercream, can be used as the adhesive and sealant between your royal icing and the cake beneath it.

It is easily made with sugar and butter, and it becomes firmer as it sits, which helps with intricate and more delicate cake decorating styles.

A thin layer of butter icing can be used as a substitute for marzipan when using royal icing, provided you give the butter icing time to sit and become firmer.

What Is Royal Icing?

Christmas cakes are traditionally iced with royal icing. This icing was given the name because it was traditionally reserved for British royalty and royal special events, such as weddings.

The ingredients for royal icing are: icing sugar, a splash of lime/lemon juice, and egg whites. The latter are beaten, but are then used raw. Because of this, there is a minor risk of salmonella poisoning.

Royal icing is different from other types of cake icing because it gets harder and ‘sets’ as it cools.

It is commonly used as a glue of sorts, keeping features in place on a cake. You will see royal icing on biscuits, cookies, gingerbread houses, birthday cakes, and wedding cakes alongside Christmas cakes.

With Christmas cakes and similar designs, royal icing is used for decoration, usually on top of another layer to help the colours pop and give the icing a stable, firm surface to land on. This second layer is usually a marzipan layer. 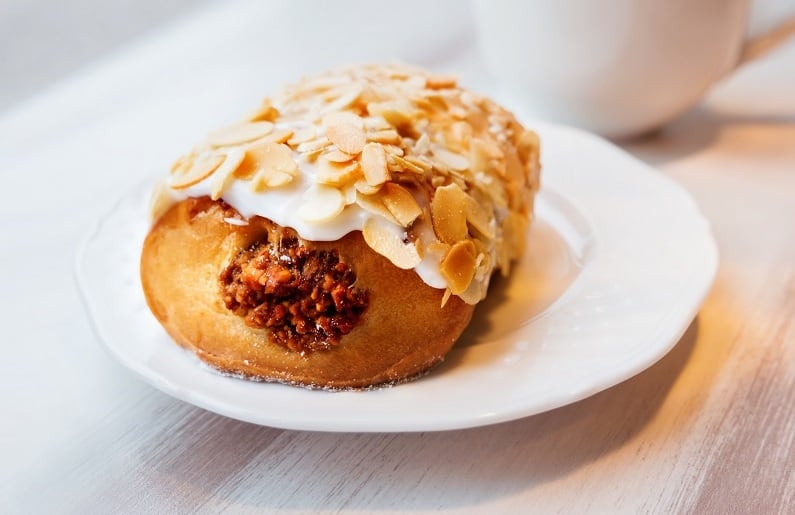 Marzipan, as well as being used to decorate and add flavour to cakes and other baked goods, is also used in a number of other ways. This includes sweets (candy) and chocolates.

One common marzipan treat is chocolate-covered marzipan, and a traditional marzipan-based treat in the UK is Battenberg cake. The usually pink and yellow squares of sponge cake are covered in a layer of marzipan.

There are lots of different recipes for marzipan these days, but traditionally, the confection is made from honey, finely-ground almonds and sugar. The combination of sweet ingredients gives it a sweetness that makes it perfect for confectionary and sweet baked goods.

When making marzipan, the ingredients are mixed into a smooth paste, which is easily moulded. This is what makes it great for tasty cake decorations.