Well, this cookware question is perhaps one of the most challenging we have ever answered!

Skillets and griddles are so similar that even some manufacturers don’t know what to call the pan they have just created! So, what is the difference between a skillet and griddle and which should you buy? 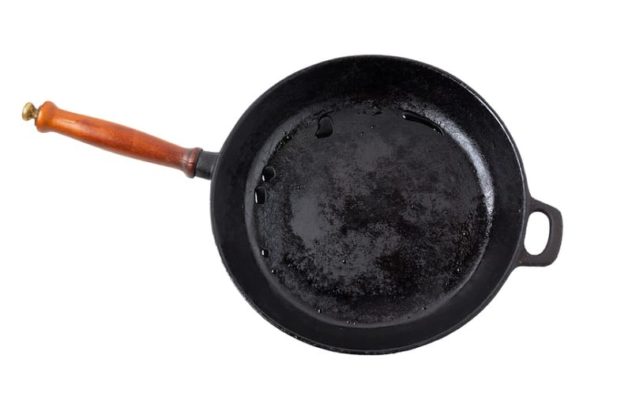 A skillet looks a bit like a frying pan. It is typically round (but not always). It has a flat bottom and shallow sides.

A skillet is nice and heavy and is designed that way. This weight means that there is plenty of metal to hold heat. This heat can then be used to fry and sear meats and veg perfectly.

Most skillet pans have a flat bottom (no ridges), some don’t, but we’ll get to those in a moment. 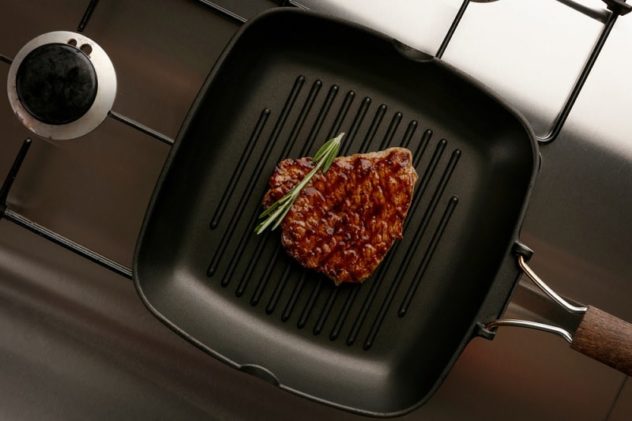 A griddle has a long, flat surface that is designed to be used with a couple of burners. A griddle is usually rectangle in shape and has very low walls. You can use a griddle in a very similar way to a skillet and sear and fry meats and veg.

They are also made out of similar materials to ensure they heat up pretty quickly and hold this heat in nicely. Most griddles (although not all of them) have ridges so that you can get those lovely char marks on your meat and veg. 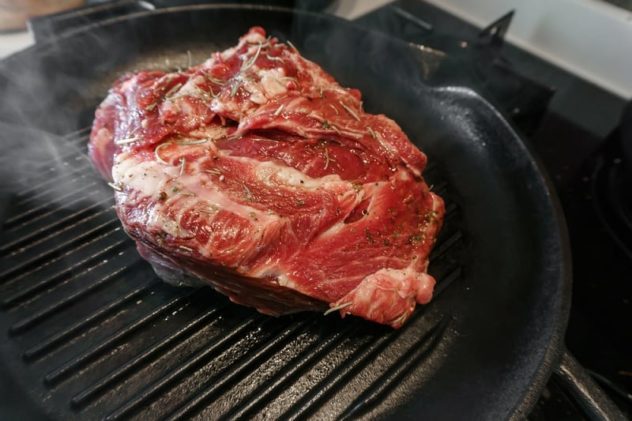 Now, you may be thinking, “I’ve seen skillets with ridges in the bottom, but they said the bottom of a skillet is flat, what’s going on?”

Well, some skillet-type pans do, indeed have ridges in the bottom, but the cooking world doesn’t recognise this as a skillet. Instead, these are called a griddle pan. Some cookware companies do call these a skillet pan, though.

These pans offer the best of both a skillet and a griddle pan. They are typically made from cast metal (cast iron or aluminium, for example). They have the ridgelines for searing meat, and they have taller walls than a griddle.

So, these are Frankenstein pans that perform double-duty.

Skillet or Griddle – Which One Should I buy?

Skillets are excellent if you want to fry a steak or two or sear some veg to accompany your meal. However, skillets are the smaller of these pans. So, if you intended on cooking a lot of meat or veg in this way, a griddle may be better.

If you have a lot of food to sear or fry, a griddle is a good choice. Plus, you can also use your griddle outside on the BBQ for a bit more control.

You can, of course, also use a skillet on the BBQ, but its smaller size is a bit more restrictive on the BBQ.

But what about the griddle/skillet Frankenstein pan? Well, these are the best of both worlds. Sure, they are a similar size to a skillet pan, so you can’t use them for a large amount of searing. Still, you can enjoy steaks with char lines and do most things that a griddle and a skillet can.

Ultimately, choosing between a skillet or a griddle comes down to how you cook. If you cook a lot of meat, a griddle maybe your best option. Just remember that you’ll be sacrificing two hob rings to use your griddle.

If you don’t sear a massive amount of meat and want a bit more versatility, a skillet is your best option.

However, for the best of both worlds, a griddle pan is a good option. You can’t cook as much at once as a griddle, but you can get sear marks (like the griddle) and retain a lot of heat thanks to the skillet-like shape.

We hope this look at griddles and skillets has been helpful. Choosing between a skillet and a griddle is really personal preference.

So, think about what you want your new cookware to do for you and then decide if a griddle or a skillet (or a griddle, skillet combo) matches your style of cooking the best.

Once you’ve decided, check out our lists of the best skillets and best griddle pans in the UK right now!