If you look at the dictionary definitions of the two dinner favourites, you’ll notice that there’s very little difference between the humble casserole and the warming stew.

Casserole is defined as “a dish in which food may be baked and served” and “food cooked and served in a casserole.”

Stew is defined as “fish or meat usually with vegetables prepared by stewing” and “to boil slowly or with simmering heat”.

Both dishes are cooked very slowly, over many hours. They are both dishes that can be created in a single pot or pan, too.

You can throw all of your ingredients in, give it a stir, and leave it to simmer for hours before you need to think about it again. 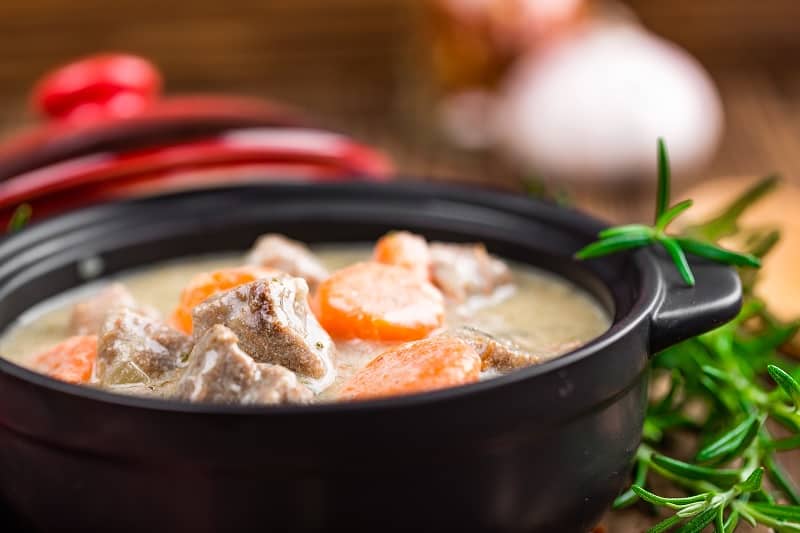 Casserole vs Stew: The Big Difference

The clue is in the definition.

A casserole is baked and served. You bake things in an oven, usually.

A stew is boiled slowly. Boiling is usually done on a hob or stove.

If you were to ask my grandmother, she’d tell you without hesitation that a casserole is cooked in the oven and a stew is cooked on the hob.

These days, however, you’re not just limited to those two options.

With slow cookers, pressure cookers, and various other kitchen gadgets and devices, you can create casseroles and stews, as well as many other dishes, in a whole host of ways.

Casserole vs Stew: The Little Difference

The ingredients are sometimes a little different in casseroles and stews, too.

Casseroles are a meal in a pot, basically. Recipes usually call for a meat product, such as casserole steak; vegetables, such as carrots and peas; and a starch-based ingredient, such as potatoes.

Stews also contain meat, and often vegetables, too. The liquid is important with a stew, though, and often consists of gravy with various herbs and spices. In this, other items can be added, such as dumplings (the traditional ‘stew and dumplings’), noodles, rice, and other options.

Starchy items, such as potatoes, are often added on the side of a stew, rather than in it. Stew and mashed potatoes, for example, is a common winter warming dish.

What’s the Difference Between Stew and Soup?

When you get down to basics, stew and soup are two very similar dishes. But, just as with casserole and stew, they have their differences.

To start with, there is usually less liquid in a stew than there is in soup. Soups, although they can be chunky, are usually smoother.

Stews, on the other hand, have more of a chunky consistency and less of the sauce or liquid.

A typical stew recipe normally recommends having enough fluid in the pan or pot to barely cover the ingredients.

Soups are generally thought of as a lighter meal. The mostly-liquid formulation makes it perfect for lunch or light dinners. It is not a heavy or overly-filling dish.

Stews are thicker, heartier, and often more filling. Because of that, it is considered best for a main dinner dish.