If you are looking for a great griddle pan, then you’ll know that you have loads of options.

Griddle pans come in loads of sizes, they are made from different materials, some are non-stick, others need to be seasoned. Which are best?

Best Griddle Pans in the UK

We’re starting this list of griddle pans off with a slight curveball. This cast iron griddle plate can be used on solid plate hobs, gas hobs and the BBQ. It’s also oven safe up to 260 degrees Celsius too. It also has deep ridges that provide lovely searing marks and allow the meat and veg to sit above any fat. So, combine this with the 46cm of cooking area, and you can cook loads of meat and veg at the same time.

We know that a griddle plate may not be suitable for every home cook, particularly cooks that haven’t used a griddle pan before.

Still, for home chefs that love cooking and want a dedicated griddle that will heat up nicely and produce some beautifully seared meats, this ProCook griddle plate is hard to beat.

This Tefal griddle pan is made from heavy, cast aluminium. It is nice and thick which allows the pan to heat up nice and evenly and distribute this heat evenly too.

This cast aluminium is nicely complemented by a titanium interior. This means that the pan is non-stick and a bit lighter than other griddle pans without compromising on heat retention.

This griddle pan can sizzle a steak on all hob types and can be used in the oven too. It has the Tefal Thermo-spot also making it simple to tell when this pan is ready to go. Plus, it has a classic look and a pouring spout.

Overall, this griddle pan is very well built, easy to use and nice and versatile. It is a fantastic addition to your kitchen arsenal. 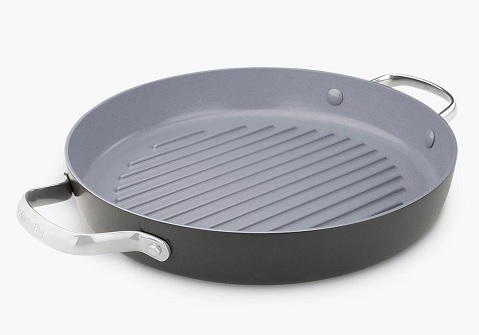 This non-stick griddle pan from GreenPan made this list on looks alone. We love the styling of this griddle pan, but it offers so much cooking power too.

This pan, once again, is made from aluminium. However, it has a non-stick ceramic interior and an ultra-tough anodised exterior. Plus, it also has fancy technology that means that the pan is suitable for all hob types too.

You’ll notice that this griddle pan has riveted stainless steel handles. So, you can also use this pan in the oven and transferring it from the hob to the oven is nice and simple.

What is a griddle pan?

A griddle pan is a heavy and robust frying pan, basically. These are designed to hold a lot of heat, so they are brilliant for searing meats. A griddle pan holds a lot of heat because of how thick the metal is. The thicker the bottom and the sides of a pan are, the more heat it will hold throughout the cooking process.

When you are searing meat, heat is vital. When you throw a steak into a pan, the pan will instantly cool down if it is thin. If the pan is nice and thick, like a cast iron griddle pan, for example, the pan can push through this change of temperature and start sizzling your steak straight away. 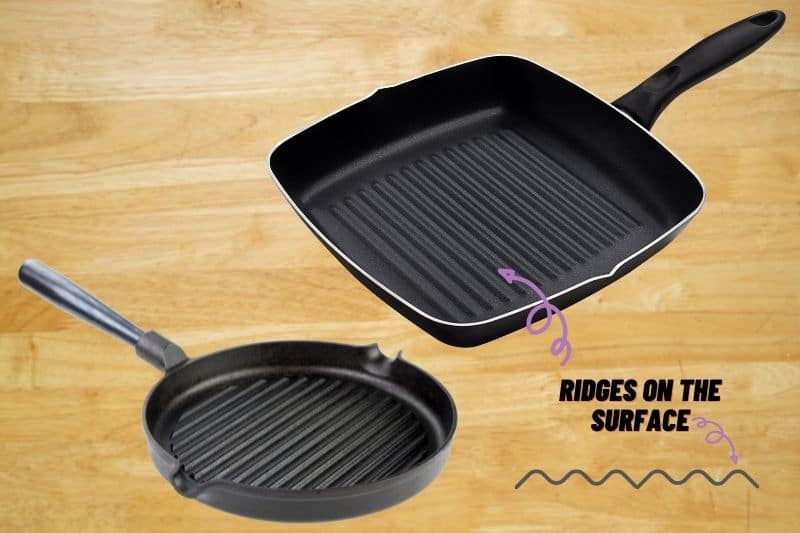 Is a griddle pan essential?

No! A griddle pan isn’t essential, but it’s a great bit of kit to have in your kitchen. If you love cooking meat, a griddle pan is awesome.

You see, a griddle pan cooks meat quickly, evenly and easily. They are a joy to use and offer amazingly tasty results. For years, my partner and I got by with a standard frying pan, but then we got a griddle pan, and our lives changed instantly.

If your household doesn’t eat too much meat, a griddle pan may also still be a valid purchase. While griddle pans are excellent for cooking meat, you can also use them for cooking veg. You can get beautiful sear marks on asparagus, for example, and so much more.

If you love cooking, a griddle pan makes your dishes look more professional. Plus, they provide a lot of versatility but are a joy to use with meats. So, a griddle pan isn’t essential, but once you use one, you’ll wonder how you ever enjoyed cooking without one. 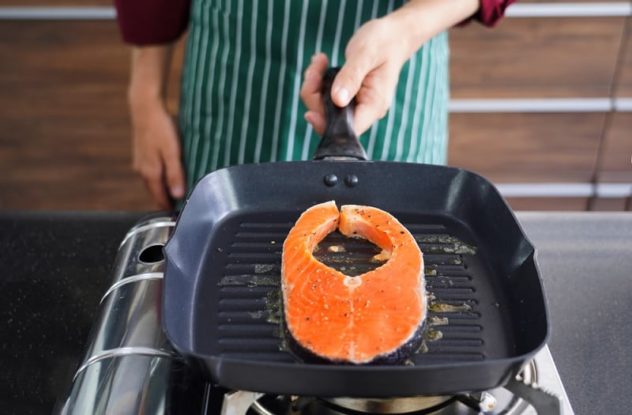 Does a griddle pan need to be cast iron?

The reason that many cooks favour a cast iron griddle pan is that they are heavy and hold heat very well. However, there are plenty of griddle pans that do the same job.

Many people are slightly put off by griddle pans because a lot of them are cast iron, and cast iron needs to be seasoned. However, as our list of the best griddle pans shows, there are loads of fantastic griddle pans on the market that are non-stick and robust that will offer everything that a cast iron griddle pan will.

It also means that any oil used during cooking will flow away as well. 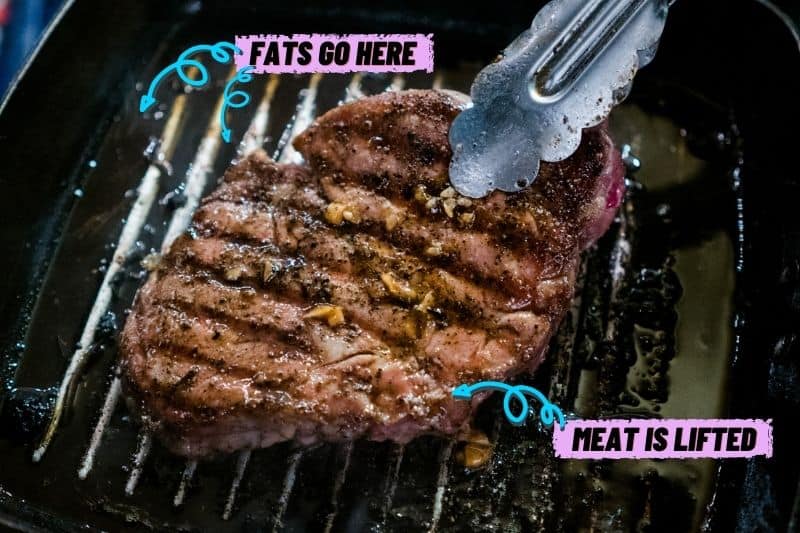 If you’ve used a frying pan for searing meat, you’ll know that the meat is surrounded by fat and oil throughout the cooking process. And when you serve the meat up, the oil and the fat will end up on the plate.

With a griddle pan, you can remove the meat from the pan, and the juices stay behind.

Meat cooked in a griddle pan is extremely tasty, and it is many people’s go-to for cooking steaks indoors.

The key is to get the cast iron griddle up to temperature before you put your steaks in. If you do, the pan will seal the surface of the steak almost instantly and trap all of the goodness and tenderness inside the steak.

Just because griddles keep the meat away from the oil and the fat, this doesn’t mean the meat isn’t tasty. In fact, cooking on a griddle can make the meat even tastier!

The Pros of Griddles 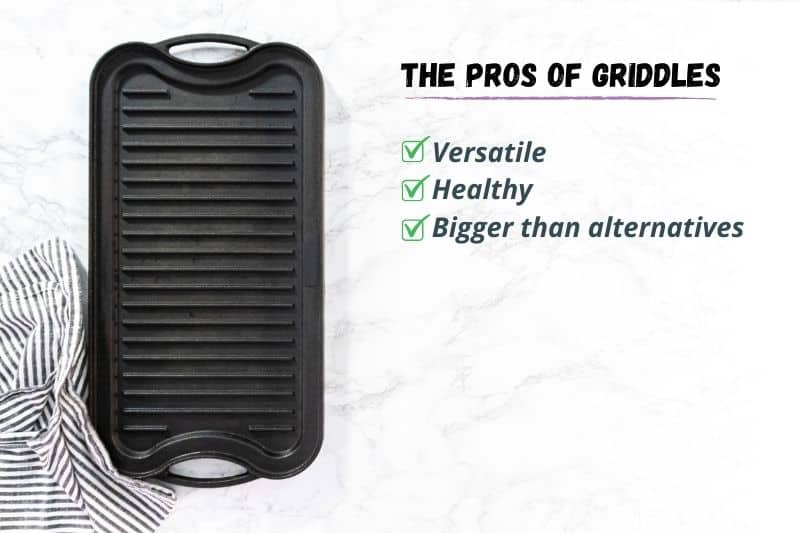 Griddles are extremely versatile. Not only can they be used on the barbecue and the hob, but they can also go in the oven.

However, there’s more. Griddles can be used to sear and fry just about anything.

Steaks, fish, veg, chicken breasts, burgers, and so much more. Plus, you can achieve those awesome sear marks too, which is cool!

Griddles are also a healthy way to cook. Much like some cast iron skillets, griddles have ridges on the cooking surface. These ridges give you cool sear marks, but they also keep the food raised above the bottom of the pan.

This means the fat and grease are out the way, and when you remove your food from the pan, you aren’t bringing that fat with you. So, griddles can cook tasting but healthy food!

You can buy large cast-iron skillets, but nothing as big as a rectangular griddle. These things are designed to fit over the top of two hob rings. So, they are huge and allow you to cook a lot of food at once.

So, if you have a big family (or like cooking massive steaks), a griddle is a really good choice. They are also lighter than large cast-iron skillets.

The Cons of Griddles 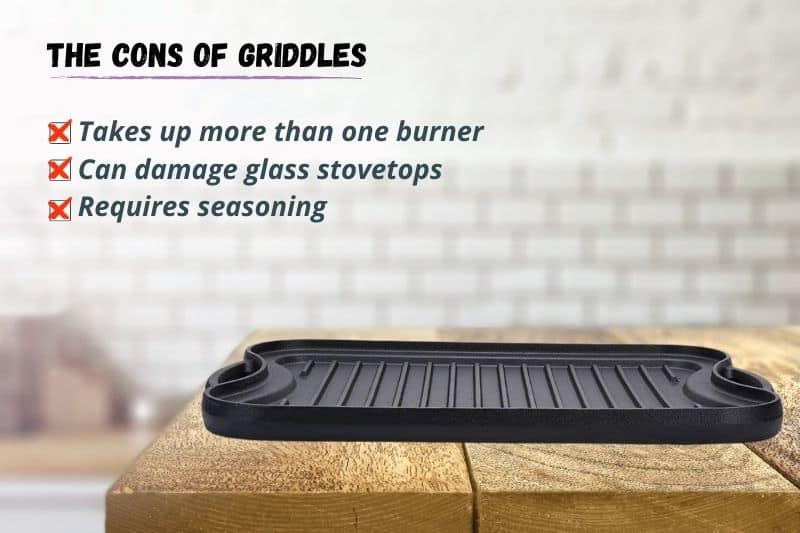 1. Takes up more than one burner

The fact that griddles are bigger is a pro and a con at the same time. While you get more cooking space on your griddle, you lose a burner on your hob. If you’re cooking a large meal, this burner could come in extremely handy.

Most griddle adverts you see show them on gas hobs or barbecues. This is because griddles are quite prone to scratching glass topped hobs.

These are really heavy (perhaps another con), and the urge to slide them off of the hob once you’ve finished using them is hard to resist.

If you slide a griddle off of a glass hob, you will damage it! Cast iron skillets are also prone to damaging glass hobs, but they are usually smaller and easier to wield.

When you buy a cast-iron skillet nowadays, most companies season it for you out of the factory.

You’ll need to top up the seasoning, but it is off to a flying start for you. Griddles, though, often don’t come pre-seasoned, so this is something you’ll have to do.

Seasoning a griddle isn’t tricky; we have a seasoning article for cast iron skillets that will work wonders. However, if you don’t want this extra step before cooking, this is a consideration.

We hope you have found the perfect searing partner for your next steak in our list of griddle pans. Remember, griddle pans are a game-changer for cooking steaks, but they offer so much more and are a fantastic bit of kit to have in your kitchen arsenal.

If we had to pick just one griddle pan to recommend it would be the ProCook Cast Iron Griddle Plate. It heats up nicely and produces beautifully seared meats and chargrilled vegetables.

Don’t forget to check out our other pan articles. We have the best pots, pans and more on here. So, come and kit out your kitchen with us and take your enjoyment of cooking to the next level.