The very British pork pie is usually made of three things: crust pastry, pork, and jelly.

Although there are now many variations of the humble and traditional pork pie, the crust and the jelly are usually non-negotiable. But what is it? And why is it there?

What Is the Jelly in a Pork Pie?

The jelly in a pork pie is usually cooled and solidified stock (traditionally pork stork), or melted, then cooled clarified butter.

Those are the two traditional fillings, along with the minced/chopped pork or other meats.

The jelly could also be partially made up of the fats or juices from the meat itself.

When you leave fat to cool, it turns hard. This is essentially the process within the pork pie (but it is much less unpleasant to eat than meat fat itself).

The jelly in a pork pie helps to keep the meat from drying out. Without some sort of fluid or moist layer, the meat inside would soon turn tough and chewy, and rather unpleasant to eat.

Not only that, when the jelly in liquid form is added at the right time during the cooking process, it helps to absorb some of the fats and juices released from the meat.

In turn, this keeps the crust of the pie firm and solid rather than soggy and droopy. It would otherwise be absorbed by the pastry.

Why Is There Jelly in a Pork Pie?

When meat cooks, it tends to shrink in size. That is why jelly, whether that’s in the form of clarified butter or pork stock, is used inside a pork pie.

After the meat has been added, the butter or stock (or other jelly-like ingredient) is then added around it, in hot liquid form.

As the pork or meat shrinks, the fluid cools and solidifies, keeping everything held together and filling the empty space.

If you look at the top of a traditional pork pie, there is usually a small hole. This is used to insert the butter/stock into the centre.

The hole is also there to allow steam to be released from inside the pie itself. Without it, the top of the pie can puff up and become distorted under the pressure. It can also split and, in some cases, pop open or off. 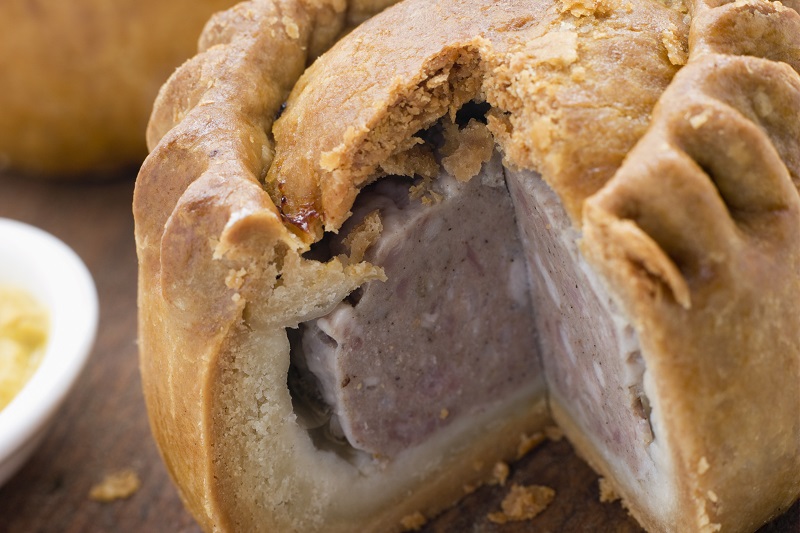 Can You Get Pork Pies Without Jelly?

You probably can, in this day and age, but that’s not always a good thing. The reason behind filling the space of a pork pie with hot liquid that cools and solidifies is to ensure that there isn’t a hot, sweating space inside the pie structure. If there is, bacteria can breed. In fact, it thrives.

The jelly layer acts as a sealant, of sorts, to protect the meat from growing bacteria. Without oxygen and other elements, the bacteria cannot grow. The jelly layer makes the pie last for longer before it spoils.

What Is Pork Pie Jelly Traditionally Made From?

If you’re a tad food-squeamish, you might not be appreciative of this next detail. A traditional pork pie jelly will be made from hot pork stock, which then cools and hardens, much in the same way as hot meat fat solidifies as it chills.

The trotters and bones help to inject gelatine into the mixture, which is what helps it to harden and sit firm. It is a similar process to making jelly.