If you’re buying a new cooker or washing machine, you may notice that some models look very similar. In fact, there are some cooker models that, other than the brand name printed on the front, look like they could be twins.

A few people have noticed that Beko and Indesit have very similar-looking washing machines, cookers, and a few other appliances. So much so that these people are convinced that they are the same company.

But are they? Are Beko and Indesit the same company?

Well, if you tried to research these two appliance companies to find out, you’ll know that you can end up starting to make a family tree for your cooker.

A single company can own 30 different brands that we know and love. But are these two cooker brands connected in some way?

Are Beko and Indesit the Same Company? 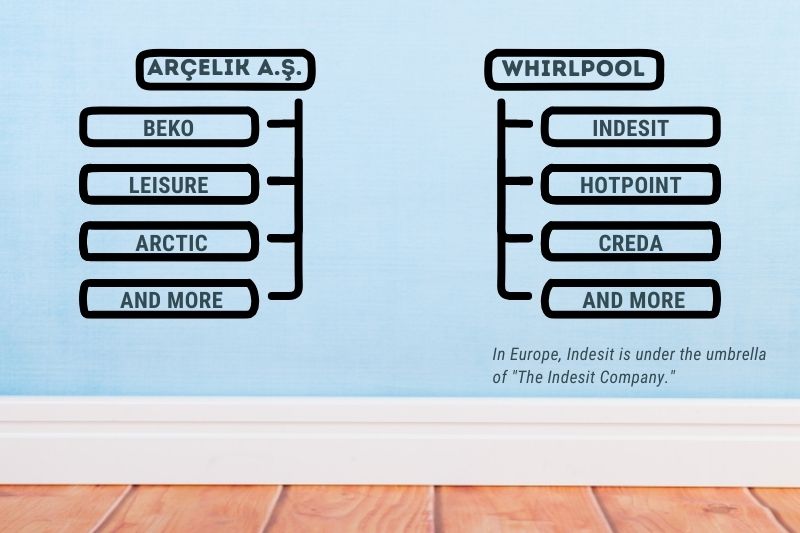 Beko and Indesit are not the same company. Beko is owned by Arçelik A.Ş., which was established in 1955. It’s one of the largest appliance manufacturers in Europe, with over 40,000 people working for them.

Yet, chances are, you’ve never heard of them. This is because they own such popular brands as Leisure, Arctic, Elektra Bregenz, Beko, and more. So, you may have appliances in your homemade by this group, but not know it until now.

Indesit, on the other hand, is owned by Whirlpool. In Europe, Indesit is under the umbrella of The Indesit Company, which also owns Hotpoint, Creda, Ariston, and a great deal more. However, all of these companies are run and owned by Whirlpool, an American company.

Why Are Beko and Indesit Appliances Similar?

You could argue that there are only a few ways of making a washing machine or a cooker. So, most cookers and washing machines do have a similar look, even a family resemblance.

Still, Beko and Indesit may look quite similar because Beko does lend their production runs and factories to other companies. This is really common in the world of manufacturing.

Rather than Indesit needing to start their own factory, they can ask Beko to produce their products for them.

So, the reason that some Indesit appliances appear to be very similar to Beko could be that these appliances were made in the same factory. We can’t confirm whether Beko has made any production runs for Indesit; sadly, they keep those cards very close to their chest.

It could be that designing a cooker is a tricky business, and they just happened to design the same one at the same time. We’ll let you decide on that one.

Why Do Appliance Companies Make Similar Appliances Under Different Names? 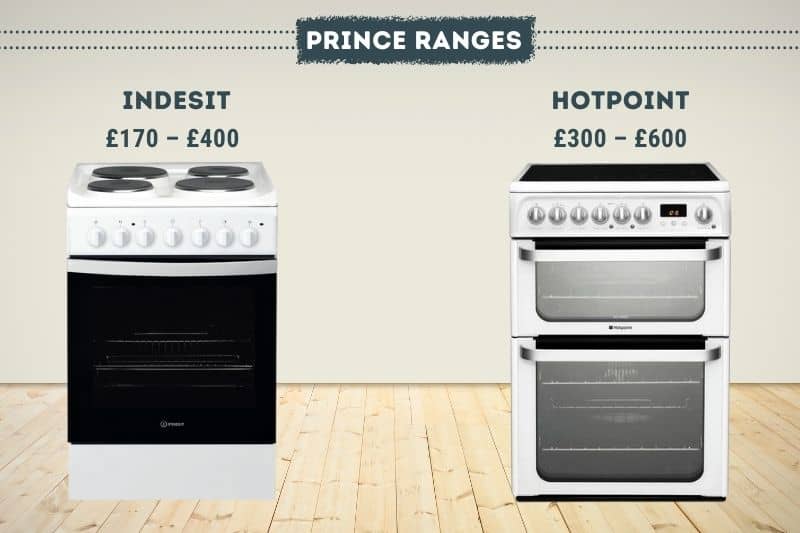 Let’s look at some of the kitchen appliance brands above a little closer. The Indesit Company (Whirlpool) owns Hotpoint and Indesit. A quick search for cookers from these brands tells us a lot of info. And gives us a clue why these companies build cookers for different brands.

Here’s a rough breakdown of the prices for these brands of cooker that came up from a quick search in Google:

As you can see, the cooker prices above are interesting. Indesit’s cookers seem to stop at the price where Hotpoint’s cookers start in price. Or very closely anyway.

Hotpoint makes some very solid kitchen appliances, and people know this, so they will happily spend more money on a quality cooker.

Indesit makes pretty good cookers and other kitchen appliances, but its name isn’t as trusted as Hotpoint. So, it mostly makes cookers that are very well priced for those of us looking for a budget, good quality cooker.

So, what’s going on?

The price points above are no mistake. These brands are marketed to different people. Those that have some money to spend and want quality will look toward Hotpoint. And those that need a simple cooker that will work well and are on a tight budget will go for Indesit.

It is simply a marketing tool that these companies can use. After all, if Hotpoint started making budget cookers, we would all start to question whether its cookers have gone downhill.

We’d also question why Indesit would make a range cooker when they have only ever made budget cookers.

So, rather than ruin the reputation of one brand or try and grow another into master builders of quality kitchen appliances, they create (or usually buy) different companies and then market them suitably.

By the way, this doesn’t mean that if you buy an Indesit cooker, you are actually buying a Hotpoint or vice versa. Even though they are under the same corporation’s umbrella, they are not the same company and likely have separate design divisions.

Beko and Indesit are not the same company and are not even owned by the same corporation. However, Beko may make some of Indesit’s kitchen appliances in its factories, which could be why they look so similar.

We hope this trip down the family tree of kitchen appliances has been interesting and helpful. For more insight into cookers, cookware and more, please explore Chef’s Pick further. We’ve got everything a chef needs to create their perfect kitchen right here.