There are pros and cons to both carbon steel and cast iron. If you’re wondering which option is the best for your cooking needs (specifically your wok needs), you’re in the right place.

We will explore the similarities, differences, strengths and weaknesses of both materials to help you decipher which is best for a wok—carbon steel or cast iron.

Cast iron is one of the oldest and most reliable cooking materials. We guarantee your grandma has a cast iron item in her kitchen and swears by it!

Cast iron is popular because of its ability to draw heat quickly and retain it well, meaning food can be cooked quickly and kept in the wok to keep warm. It also adjusts well to temperature changes, so it can be easy to control the outcome of your cooking by using a cast iron wok. 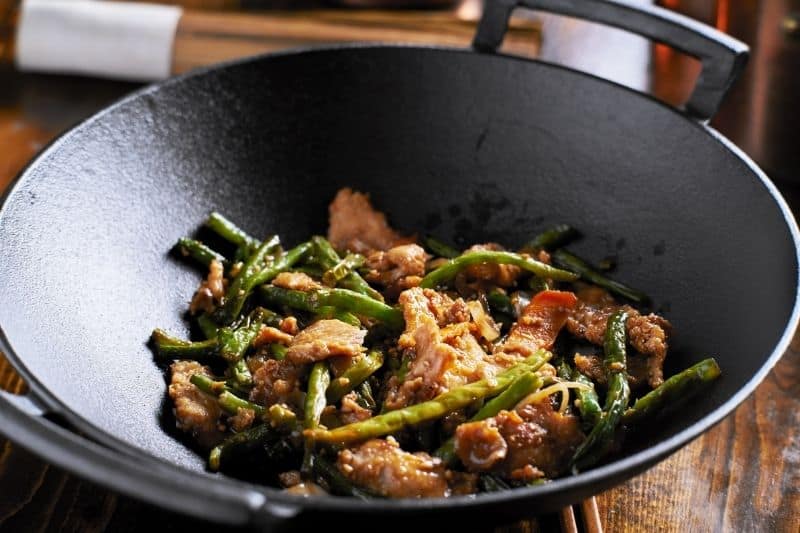 Cast iron woks are also spacious and brilliant for large families or one-pan meals such as stir-fries, fresh pasta dishes, and much more.

Traditional cast iron (meaning it doesn’t come with an enamelled coating) shouldn’t be cleaned with soapy water. Scouring pads must be kept at bay too.

One of the pain-points of owning a cast iron wok is that you need to “season” it every now and then to make it non-stick, which can be a long, tiresome, and tedious process.

It is crucial that your cast iron wok is properly cleaned and maintained if you expect many years of good service (and delicious meals) from it.

Many modern cooks (commercial or otherwise) favour the carbon steel wok purely because it isn’t as heavy and bulky as its cast iron brethren.

Carbon steel is also quick to draw heat because of its thermal conductivity. However, it’s not as quick as cast iron. 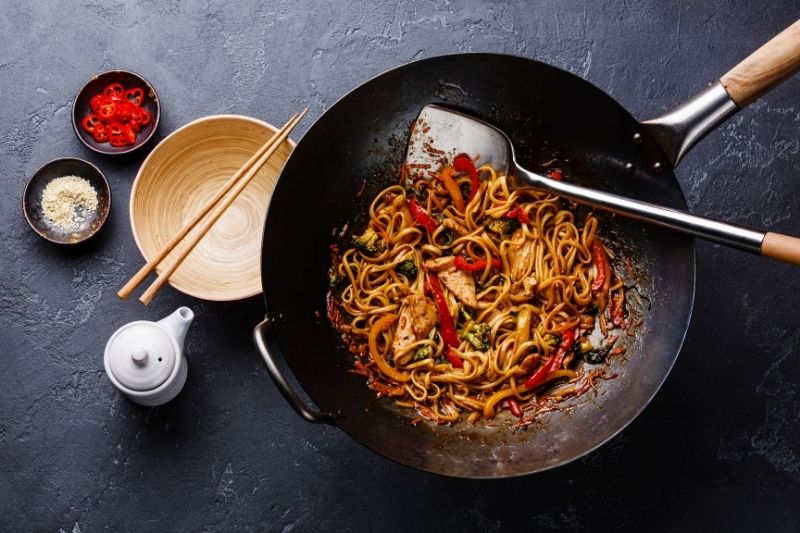 Carbon steel woks are incredibly endurable (which isn’t the case with thin/lightweight cast iron woks). Therefore, they are perfect for high-heat cooking.

Although, like cast iron, your carbon steel wok will need seasoning occasionally, you can purchase ‘pre-seasoned’ woks, which means you won’t have to do it as often (if at all).

Carbon steel woks do generally tend to be cheaper in cost too.

As with most things, which is best often comes down to personal preference, as both have their pros and cons.

Cast iron has its militant devotees because of its long-standing sturdiness and reliability. However, it is worth mentioning that with cast iron, you get what you pay for. If you purchase a cheap and lightweight cast iron wok, chances are you won’t see longevity out of it.

Cheap woks have a reputation for being fragile and breakable. They are often heavy and bulky, so they’re not ideal for camping or for folks who find it difficult to handle heavy objects.

The difference between the two materials is marginal and both come with their benefits and pain-points, so whether you purchase a cast

iron wok or a carbon steel wok, you are likely to see many years of loyalty from it, providing it is well maintained and well looked after.