Cast iron is the cooking material everyone’s gran swears by.

Cast iron is one of the more traditional pan types, and it is favoured by many cooking lovers and chefs. But is it non-stick? Let’s find out…

Cast iron isn’t non-stick in the regular sense. It’s not coated with man-made chemicals that prevent foods from caking to the sides and bottom. However, a well-seasoned cast iron pan will be non-stick.

What Is Cast Iron?

Cast iron is a group of iron-carbon alloys, with its carbon content being more than 2%. It’s known for its low melting temperature, good fluidity, castability, and its resistance to warping and wear and tear.

Its place in cooking is said to date back as early as 5th century BC China. It is made from melting iron ore in a blast furnace.

What Is Cast Iron Seasoning? 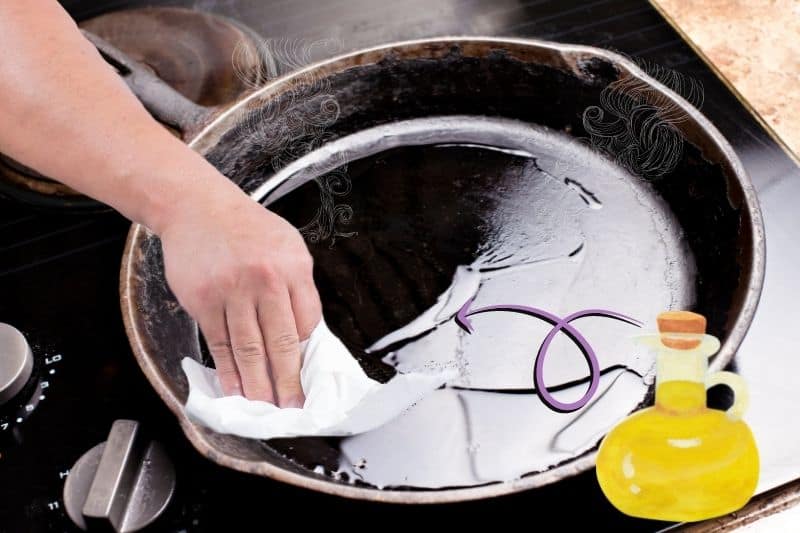 “Seasoning” is simply oil baked onto cast iron that then triggers a process called polymerisation (the process of countering monomer molecules together in a chemical reaction to form polymer chains).

Seasoning will help maintain your cookware and keep its classic black coat in good shape.

Seasoning forms a smooth, easy-release cooking surface within your pan, and helps prevent it from rusting. Cast iron cooking items take a little extra care, but a well-seasoned cast iron pan will last for decades.

Why Is Cast Iron Popular in Cooking?

Cast iron pans are ideal for cooking foods that require hot heat. Cast iron will draw in and maintain heat rapidly, and unlike other pans (such as aluminium), cast iron heat won’t fluctuate.

Cast iron pans continue to have its devotees because they’re long-standing and famous for their sturdiness, versatility, and durability. They’re arguably one of the strongest types of pan you can buy, and they’re inexpensive! 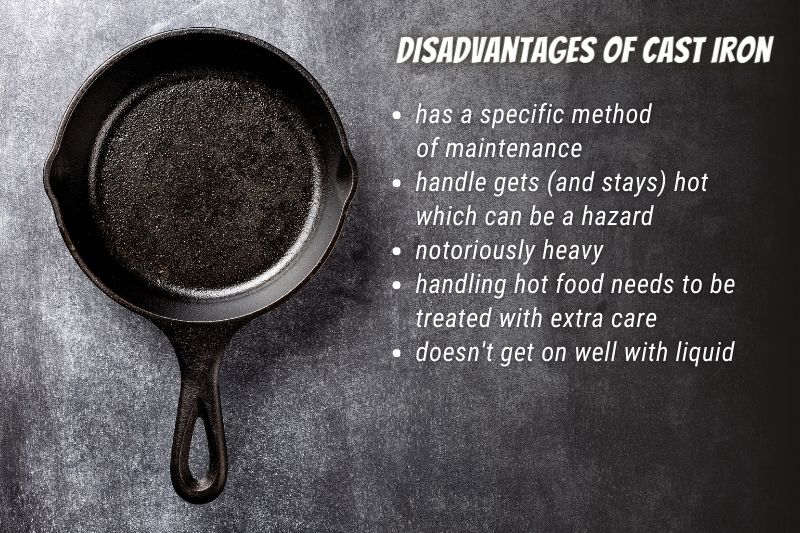 While cast iron can provide a cook with many blessings, it also provides a few bugbears.

As we mentioned earlier, cast iron has a specific method of maintenance.

Seasoning is crucial for good upkeep. While you can now find supposedly ‘pre-seasoned’ cast iron pans on the market, it is still recommended to occasionally season them.

While cast iron is commended for its rapid ability to both draw and maintain heat, this can also be a hazard – because the handle gets (and stays) hot.

Cast iron is also notoriously heavy, which can be off-putting in comparison to the many modern cooking alternatives that are much more lightweight.

Cast iron can often feel like stone, and handling hot food needs to be treated with extra care.

The final bugbear is that cast iron and liquid don’t get on too well. This can be a blessing for the avoidant washer-upper, but it means your cast iron pan isn’t suitable for boiling or cooking fluids – acidic foods (such as tomato sauces) are to be avoided too.

This can throw a spanner in the works if you’re partial to one-pan cooking.

Oh, and they can be prone to rusting! 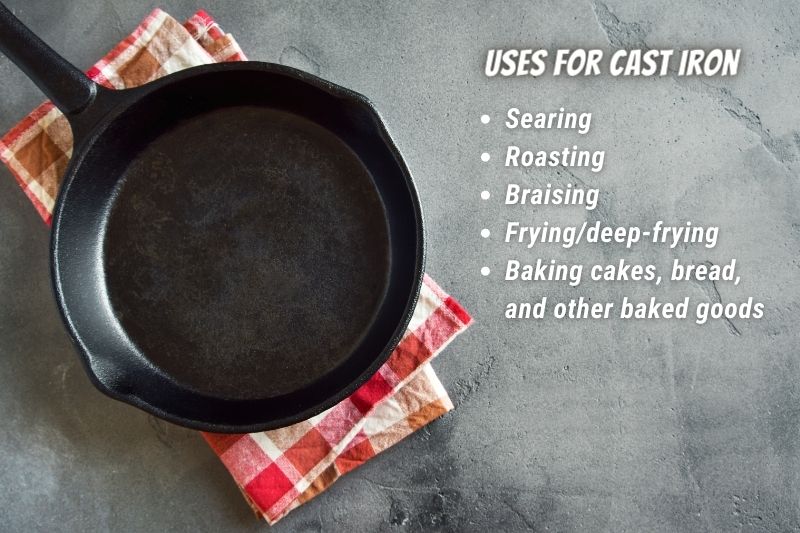 Because of its heat-drawing prowess, cast iron is ideal for:

Anyone who uses their kitchen on a regular basis will certainly find use for at least one cast iron product in their cupboards. If you don’t mind the seasoning process, as well as your pan being somewhat on the weighty side, a well-maintained cast iron pan will serve you well.

Just keep water, soap, and acidic foods away from it, and you and your cast iron pan will be pals for a long time.

And yes, if it’s well looked after, your cast iron pan will be non-stick!