Bacon became popular in the UK in the 1770s and it has remained a firm favourite ever since. It is one of the most regularly bought meat products.

It is made from salt-cured cuts of port, usually taken from the belly or the back of the pig.

In the UK, bacon is eaten as part of a full-English breakfast where it is served alongside sausages, toast or fried bread, eggs, and other cooked breakfast items.

It is also associated with Christmas, when it is served wrapped around sausages as “pigs in blankets”.

Other uses for bacon include adding it to pasta dishes such as carbonara or serving it in rolls as a snack, popular in cafes as both a lunch and breakfast item.

Raw bacon is pink in colour and dangerous to eat, so it’s useful to know how to tell if it is cooked or not.

Undercooked bacon will be flat in shape, pink in colour and with a soft almost slimy feel to it.

Cooked bacon turns a darker brown-red and will curl at the sides and edges and will develop a firmer crispy texture to it.

If your bacon is very thick, it may be worth cutting it to check it looks cooked all the way through, but you can usually tell just from checking each side of the bacon if it is cooked enough.

What Happens If You Eat Undercooked Bacon?

Any undercooked pork can be very dangerous.

In the UK, bacon is treated with chemicals during processing to lower the risk of trichinellosis. Trichinellosis is a parasitic worm-based infection that can cause abdominal problems that last for months.

The severity and longevity of the illness is variable and dependent on the number of parasites that were present in the bacon.

Cooking your bacon thoroughly kills of these parasites and makes it safe to consume, so do not eat bacon if you have any doubt that it is not properly cooked.

Bacon should turn from a brighter pink colour to a browner tone, and the fat should be rendering down. It is better to overcook your bacon than undercook it so aiming for a slightly darker brown colour and crisp texture is the best idea. 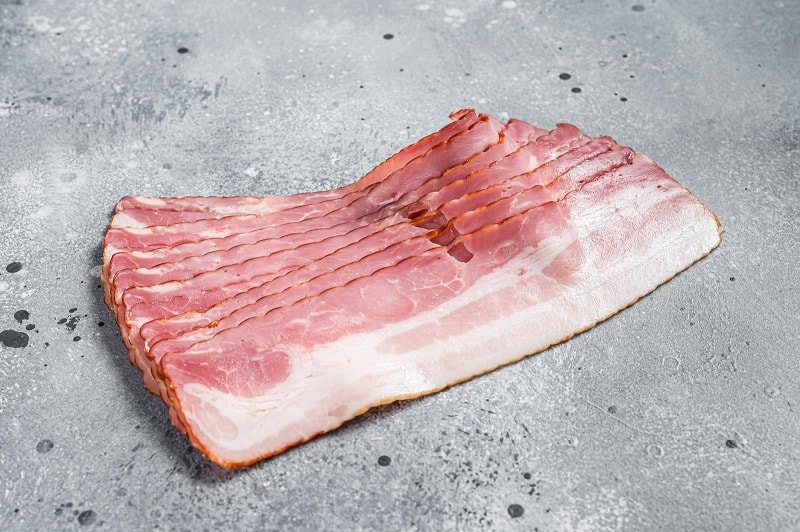 How Long Should Bacon Be Cooked For?

The cooking time for bacon varies depending on the size and thickness of the slice, but as a general guideline, a piece of bacon should be cooked for 2-4 minutes on one side and then flipped over, and the other side cooked for another 2-4 minutes.

Increase the cooking time if you like your bacon crispier. Bacon can be cooked in the oven for between 15 and 20 minutes, depending on its thickness.