Turkey ham is a processed ready-to-eat meat product that is usually sold in the fridge section of the supermarket. It can be sold in slices in packets, or as a formed block of meat to be sliced at home.

Despite the use of the word ‘ham’ in its name, turkey ham doesn’t contain any pork. The name derives from its similarity to pork ham slices and the fact that the two are used for similar purposes, such as in sandwiches, paninis or as pizza toppings.

What Is Turkey Ham Made Of?

Generally, turkey ham is made from processed turkey thigh meat, sometimes meat that has been deboned mechanically.

This is mixed with water, some preservatives and some added flavourings and then formed into a block.

The block can be bought whole, or it can be sliced and sold as sliced ham in a variety of thicknesses. Most turkey ham has a fat content of about 5%.

Different brands of turkey ham use different additives and methods of production which means that how healthy the turkey ham is can vary from brand to brand.

Whilst turkey ham often has added vitamins and minerals, some evidence suggests that processed meats when eaten regularly can increase the risk of colorectal cancer.

What Can Turkey Ham Be Used For?

Here are some of the common uses for turkey ham: 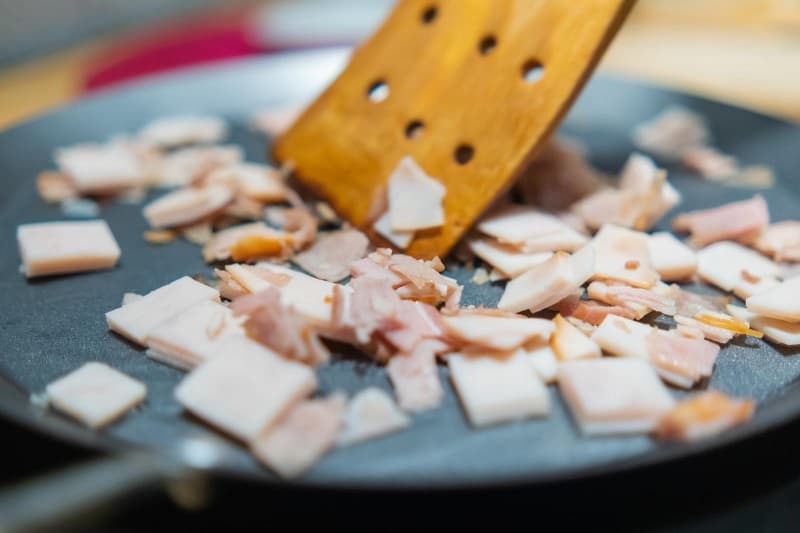 Are There Different Types of Turkey Ham?

Turkey ham can come in a few different varieties. Low fat and non-fat turkey ham is made with less fat than the standard turkey ham and will contain less than 5% fat.

Some turkey ham comes in a smoked variety whereby flavourings are added during the making process to give the turkey ham a taste reminiscent of smoked meat, in the same way you can get smoked and unsmoked ham or bacon.

There are also brands of turkey ham who choose to flavour their ham to taste like a pork-based ham. This is often done to appeal to those who choose not to eat pork for religious reasons.

It is a common misconception that halal meat is a certain type of meat when in fact it refers to the way that the animal was killed, and the meat is produced.

Due to the teachings in the Qur’an, many Muslims do not eat pork at all and so may turn to turkey ham as an alternative food item.

Providing the turkey has been slaughtered according to Islamic law then turkey ham can indeed be halal.