If you’re interested in making a cheesecake and happen to take a peek online for recipes, you may notice that, on some sites, the dish calls for a “block” of cream cheese, or an “American” version of cream cheese.

Here in the UK, cream cheese is often sold in tubs, such as the widely popular and readily available brand, Philadelphia cream cheese.

Not only is the packaging of UK cream cheese different to its US counterpart, but the product inside is often slightly different too.

If you’re in the UK, you probably won’t be able to get hold of a block of American cream cheese easily.

However, you can use UK cream cheese such as plain Philadelphia cream cheese (spread) as a substitute, but you will need to alter your recipe ever-so-slightly. You may also need to put in a little extra prep-work.

How Are American and UK Cream Cheese Different?

Although they are the same product when you get down to the heart of it, and you can use both types of in the same recipe without too many problems, American-style cream cheese tends to be a little harder than the tub version. It is more like butter: tougher to move or spread around.

As you may well know, Philadelphia and other tub cream cheeses in the UK are soft. They don’t require cutting with a knife (like you would with ‘proper’ butter).

UK cream cheese also has a slightly different fat content to American cream cheese, although this is dependent on the brand.

American cream cheese is defined as having milk fat content of at least 33%, according to the U.S. Food and Drug Administration. Not only that, the FDA states that the pH level must be between 4.4 and 4.9, and the moisture content can only be a maximum of 55%.

These specifics do differ from country to country. Canada, for example, defines cream cheese as having a slightly lower milk fat content of 30%.

If you take a look at the packaging of a tub of Philadelphia soft cheese or cream cheese in the UK, you’ll see that it has a fat content of 21g per 100g, which amounts to 21%.

Because UK cream cheese has lower fat content, it tends to be runnier and slightly more difficult to work with. You will commonly find the word, ‘spread’ on the packing, and/or it will be referred to as ‘soft’ cream cheese. 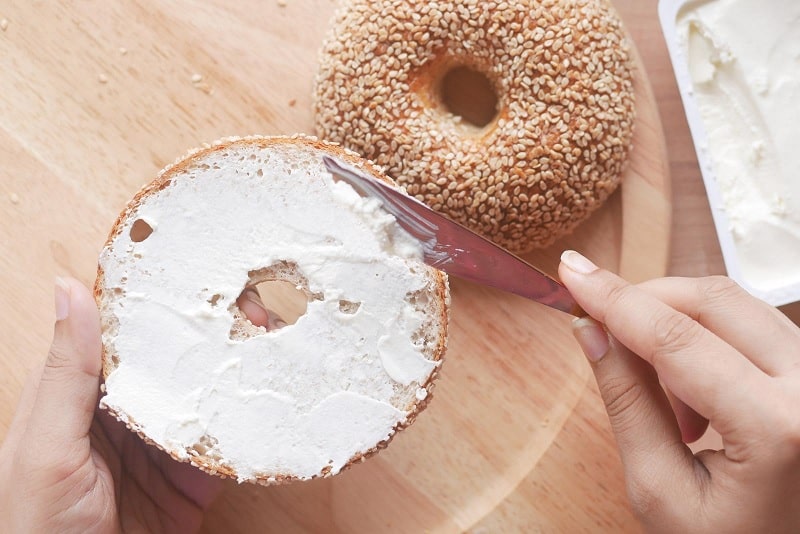 You’re probably already keeping your cream cheese in the fridge, but chilling UK-bought cream cheese is the best way to make it firmer, which then makes it easier to work with when creating cheesecakes and similar.

You can also try to reduce some of the water content in your UK cream cheese – the extra prep-work I talked about earlier on.

To reduce the water content of cream cheese, you’ll need a few items:

You will need to take the spreadable cream cheese from the tub and place it into the centre of the cheesecloth, wrapping it up.

This parcel should then be popped into the sieve/strainer and placed over the first glass bowl, which will catch the watery drips.

The second glass bowl (or similar) is to act as a weight. You will need to place this on top of the cream cheese wrapped in cheesecloth so that it pushes down and helps to force the fluid out.

Put everything in the fridge overnight. When you come back to it the next day, the excess fluid should be in the bottom glass bowl, and the cream cheese should be firmer and more like the blocks that many recipes call for.

What Can I Use Instead of American Cream Cheese?

If you’re making a cheesecake or similar in the UK and don’t have access to the firmer American-style cream cheese, you can use the UK version of cream cheese without any problems, for the most part. You can also use the moisture-reducing approach I mention above.

You can also use a number of other cheeses, including mascarpone cheese, ricotta cheese, Neufchâtel cheese, and sour cream. The recipe will sometimes need to be altered to reflect the cream cheese substitution.