Approximately 1 in 10 people in the UK are vegan or vegetarian, and the numbers are rising consistently.

The lean towards meat-free meals for both environmental and moral reasons has become stronger with more and more meat-eaters choosing to balance their diet with some meat alternatives.

Quorn was first developed in 1983 and is one of the most prominent meat alternative brands offering a wide range of vegan and vegetarian products from sausages to mince to chicken alternatives, as well as ready meals such as cottage pie and lasagne.

The meat substitute in Quorn is trademarked as mycoprotein, and it comes from a fungus that is fermented and the fermentation leads to the protein we know as Quorn.

This mycoprotein has become a popular meat substitute because of its ability to absorb flavour and be prepared in different ways that mimic different meat products.

Can Quorn Sausages Be Reheated? 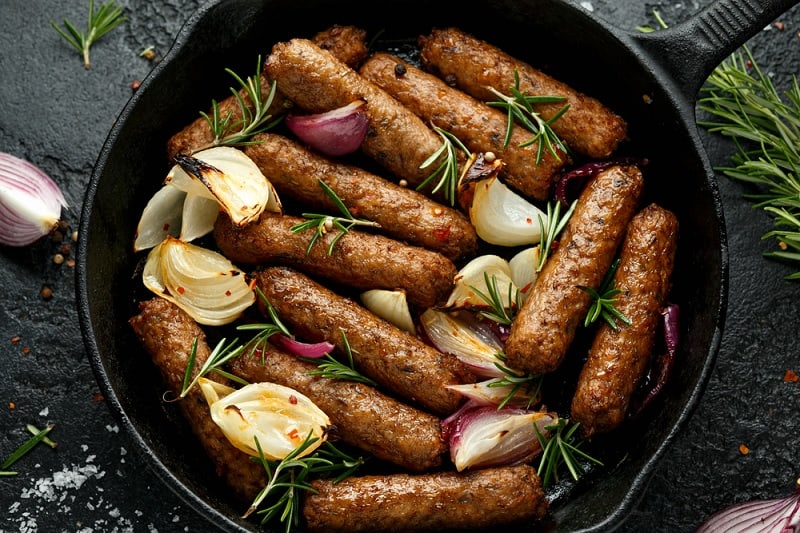 Quorn sausages come in a few varieties, including different vegetarian and vegan options as well as different styles and flavours of sausage.

Some Quorn sausage products are bought from the fridge section of the supermarket while some others are available as frozen varieties.

Quorn sausages that have been cooked through once can be reheated and eaten without any risk to the diner. This applies to sausages reheated on their own or reheated as part of an existing meal such as a sausage casserole.

Is it Possible to Reheat Quorn Mince?

Quorn mince differs slightly to that of its meat counterparts in terms of texture, but it is great at absorbing flavour and makes a very good Bolognese dish.

If you find you have some leftover Quorn mince, then you can freeze or refrigerate it and reheat it on another occasion.

If the Quorn mince was cooked originally as part of their ready meal range and frozen when it was bought, then it is best not to reheat it.

Is it Possible to Reheat Quorn Pieces?

There are various Quorn pieces available to purchase. These have been made to mimic specific meats such as chicken and different styles of dish such as Quorn fajita pieces or Quorn chicken style chunks.

While the style of the Quorn pieces varies, the reheating advice remains the same.

Quorn pieces can be reheated, and your leftovers can be enjoyed another day. It is recommended that all reheated Quorn is piping hot throughout before eating.

Can You Reheat Quorn in the Microwave?

The microwave provides a quick and easy method of reheating Quorn.

Individual Quorn products, as well as meals containing Quorn items, can be reheated using the microwave.

A few minutes on full power is usually enough to reheat a refrigerated Quorn dish. Frozen Quorn leftovers will require a little longer and may need stirring during the process.

Providing your Quorn products or meals are cooled and stored properly, either in the fridge or freezer, they can be reheated safely.

Keeping leftover portions of your Quorn-based dinners can be a great way of spreading your meat-free meals further.