If you need parchment paper, you will be happy to learn that you can buy parchment paper in the UK. A quick search online will provide plenty of results for you to choose from.

You can also use a slightly different product—”baking and greaseproof paper”. This is available from most UK supermarkets as well as a number of online stores.

Is Greaseproof Paper the Same as Parchment Paper?

Greaseproof paper is a type of collective name for a number of different types of cooking paper that are, as the name suggests, greaseproof.

Butter or sandwich paper, for example, doesn’t boast the same non-stick properties as parchment paper. It is best suited to wrapping sandwiches and other similar food products, as the name, “sandwich paper” suggests.

Wax or waxed paper doesn’t behave well in the oven. The wax melts, and it can also give off smoke.

This can then alter the taste and colour of your food. It is best used for wrapping food items that are cold, such as deli meat, cheese, and pastries.

Parchment or baking/baker paper is perfect for use with a number of cooking techniques and styles, both in the oven and out of it.

In the UK, greaseproof paper and parchment paper (or baking paper) is sometimes sold as the same product, and people use the names interchangeably. If you take a look at almost all of the well-known UK supermarkets, you’ll often see a product called “baking and greaseproof paper”.

Baking and greaseproof paper, sometimes just called either baking and/or greaseproof paper, can be used for oven cooking and similar techniques with certain precautions. These include avoiding naked flames (as the paper is flammable) and also making sure it doesn’t touch the hot sides of the inside of the oven.

What Is a Good Substitute for Parchment Paper?

If you are unable to get parchment paper, you can use what is marketed simply as ‘greaseproof paper’ in the UK, but you will need to add a layer of oil or grease, much in the same way as you would with a baking pan or tin.
You should ensure that your ‘greaseproof’ paper is suitable for baking and oven cooking, if that is what you plan to do with it.

What Is Parchment Paper Used For?

Parchment paper is used in a number of ways during cooking and baking. One way that it is commonly used is to eliminate the cleaning associated with wiping pans and similar cooking containers and tins with butter, oil, or lard, to prevent things from sticking.

You would lay a sheet of parchment paper on a baking tray before then adding cookie dough, for example. The paper itself has non-stick properties thus eliminating the need for messy greasing.

Parchment paper can also be used when cooking vegetables and similar things on a flat pan (also known as a sheet pan).

It helps to keep things clean. The entire paper sheet can be simply scooped up and disposed of after cooking, and the pan won’t be covered in grease or other mess when you’re done.

Parchment paper can be used in all of the ways that you would use wax paper, but the same statement does not apply the other way around. Wax paper doesn’t behave well when used in the oven, so parchment paper would be the better choice.

Parchment is also used as a method of cooking, too. Small envelopes are created with the paper, which food is then cooked in, usually via steaming.

This method is called ‘en papillote’, which is French for “enveloped in paper”, and is used for baking or steaming vegetables, fish, chicken, lamb, and others.

Parchment paper is popular because of its ability to be composted. The paper itself is cellulose-based. 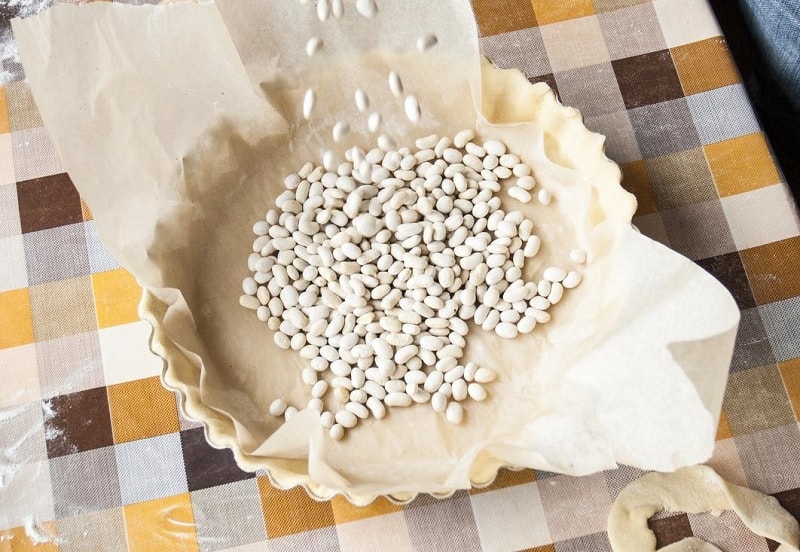 Where to Buy Parchment Paper in the UK

You can buy parchment paper from a number of places in the UK. There are several options available on Amazon and on Ocado.