Coleslaw is the perfect companion to dishes, adding a freshness that’s complemented by crisp texture and creamy flavours.

A multitude of sensory delights in a single mouthful, coleslaw is a way of adding vegetables as well as a little zing.

Coleslaw can be made with a variety of ingredients, and it’s simple to make at home. It can be tempting to make a huge bowlful at once and stash in the refrigerator. But will it last long enough for the menu plans you have for the week?

It’s incredibly irritating to make up a large portion of food, only to watch it rapidly spoil so below you’ll find everything you need to know about coleslaw and its lifespan.

How Long Does Coleslaw Take to Go Bad?

Coleslaw can last between 3-5 days when stored in the refrigerator before it starts to go bad. However, a lot depends on the storage conditions and how it was prepared.

Coleslaw should ideally be refrigerated within two hours of it being made. This is to ensure harmful bacteria don’t have the chance to multiply and spread while being kept at room temperature.

If coleslaw is left at room temperature for more than two hours, it should be thrown away rather than refrigerated.

Once bacteria have started to multiply there is no way of destroying them. Chilling coleslaw will not get rid of bacteria which has already grown.

The more quickly you chill coleslaw after making it, the more likely it is longer to last in the fridge. But even coleslaw that’s refrigerated immediately should be thrown away after five days, even if it still looks OK. 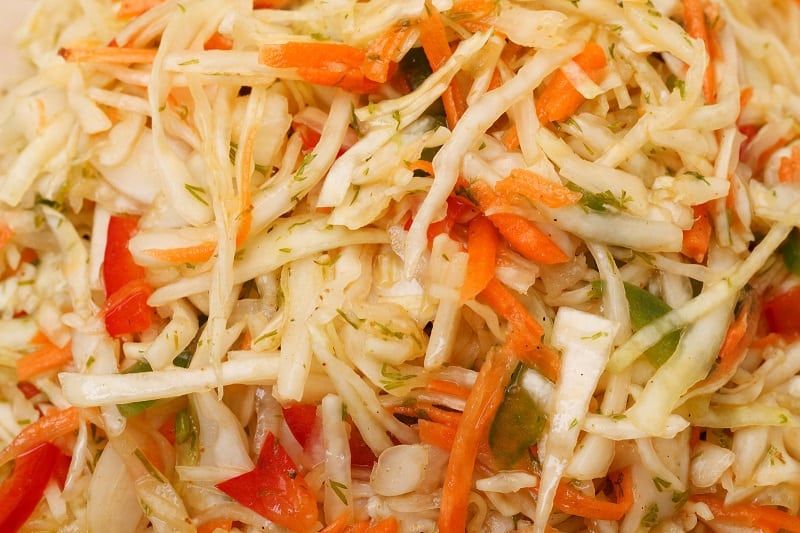 How Do I Know if Coleslaw Is Bad?

While other cabbage-based dishes, such as kimchi, can last for a long time, the same can’t be said of coleslaw. It has a relatively short lifespan and when it goes bad there’s no mistaking the taste.

A sour, vinegary taste will render the coleslaw inedible so if it makes it as far as your mouth. You’ll instantly spot that there’s something wrong.

But there are some visual clues you could look for first. There’s no need to suffer the unpleasantness of coleslaw that’s gone off if you do a few simple checks.

A sniff test works well on lots of foods, and coleslaw responds very well to this. If it has gone off, or is on the way out, the smell will be very different.

Some types of coleslaw have a naturally sour smell, such as those made with lemon juice in the dressing. As long as you know what’s normal for your coleslaw, if you notice a change that’s a big red flag that there’s something wrong.

Your coleslaw shouldn’t discolour while in the fridge if it’s being stored correctly. Therefore, if you see dark patches developing, the only place the coleslaw should be going is in the bin!

The same applies to any mould that starts to grow; coleslaw can’t be rescued once it reaches this point.

Can You Freeze Homemade Coleslaw?

If you know that you’re not going to get around to eating the coleslaw within the next couple of days, freezing it might be something to consider.

The vegetables in coleslaw generally freeze and defrost very well, especially as there’s no need to heat it at any point. The dressing can be a problem, and this is why not all types of coleslaw can be frozen.

If you have a mayo-based, creamy dressing, it won’t freeze well. Mayo dressings tend to go watery and split when frozen and are best avoided.

In contrast, lemon or vinegar-based dressings will freeze extremely well and will allow you to freeze your homemade coleslaw for up to six months.