Pasta has become a firm family favourite in the UK with it gracing dinner tables daily in a variety of forms from pasta bakes and macaroni cheese to lasagne and carbonara.

Pasta is cooked by immersing it into boiling water and cooking it in the water so that it absorbs the water and becomes softer.

It can be really tricky to tell when your pasta is done and even pasta packets offer a time guide rather than an exact time or way of telling.

We’ve put together some information to help you learn how to tell if your pasta is ready and how to get the best results from your cooking.

How to Tell When Pasta Is Done

The simplest way to see if pasta is cooked is to taste it. Taste it before you think it might be done so that it does not get left and end up overcooked.

Keep an eye on it and taste it regularly after it has been cooking for about 8 minutes (dried pasta) or 2 minutes (fresh pasta), until it is exactly as you’d like it to be.

This way it will also be cooked to your taste rather than that of the person who wrote the cooking instructions for it.

Pasta should never take more than 12 minutes to cook provided the water is hot enough. Of course, if you enjoy soft, mushy pasta, it’s fine to cook it for longer!

The phrase al dente means “to the tooth” in Italian. The dictionary definition of al dente describes it as “so as to be still firm when bitten”, which contrasts with the overcooked softer pasta that British people are accused of eating.

Guidance suggests that in order to cook pasta to the al dente stage you should try the pasta when it is about two minutes before the packet tells you it will be done.

At this point you should see how the pasta feels in the mouth. It should be chewy and requite biting, but it should not be solid.

It is better to keep trying the pasta than leave it and end up with it cooked beyond the al dente stage.

Should I Throw My Pasta at the Wall to See if it Is Cooked?

There is an idea for pasta that suggests that to see if your spaghetti is cooked you should throw it at the wall and if it happens to stick to the wall then it is cooked. This image is often seen on cookery shows or in films and tv programmes.

Whilst it seems that this could be a logical way of testing pasta, it is actually a myth and not a good way of seeing if your pasta is cooked.

Pasta cooks from the outside in and so pasta will become stickier on the outside before the inside is cooked and all pasta that is partly cooked, perfectly cooked, and overcooked will likely stick to the wall.

Pasta with a hard inside will stick to the wall, as will that which is overcooked and extra sticky. Using this method to determine how cooked your pasta is will just lead to disappointment when eating. 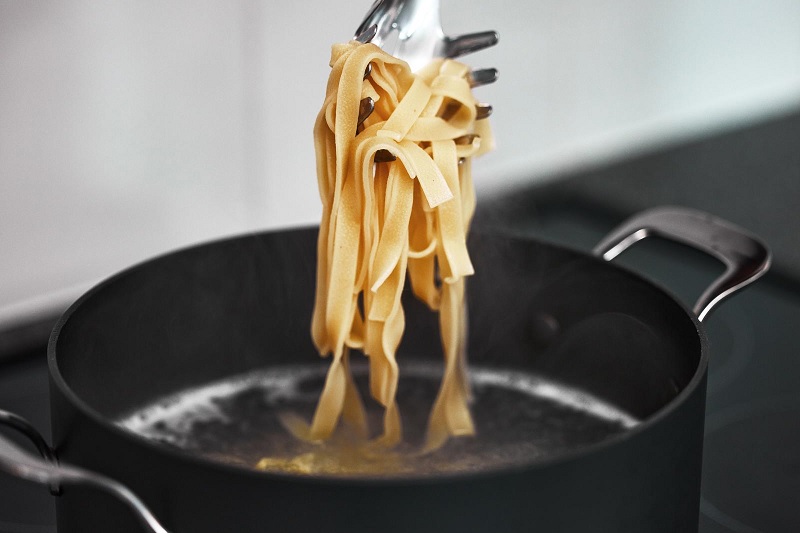 Does Pasta Float When It’s Cooked?

Most pasta does not float when its cooked, or if it does float then it is not an indication of how cooked it is.

The exception for this is filled pastas such as ravioli or tortellini. In this case, they float because the air inside the parcel expands as it heats up and this causes the pasta to float.

Due to its density, dried pasta is less likely to float that fresh pasta, but this does not provide an indication as to whether it is cooked.

This is a subjective question as we all like different things. You may also find that you prefer some pastas more cooked than others.

You may like your penne on the al dente side and your macaroni on the overcooked side. The idea for pasta is soft enough to chew and eat but without being mushy or overly sticky.