Should you buy a skillet or a saute pan? That is an age-old cooking question that has plagued all home cooks for years.

The trouble is, these pans look so similar that many of us don’t even know the difference between a saute pan and a skillet.

Is there actually a difference? Will you notice the difference while cooking? Should you buy both pans, or will one of these amazing pans do the job of both?

Just like all cooking questions, this one brings up even more questions, so today, we’re going to answer them all.

First, let’s look at the differences are between saute pans and skillets, shall we?

The Differences Between Saute Pans and Skillets

A saute pan has straight sides or sides that have a very slight curve to them. Skillets, on the other hand, have slanted sides.

This isn’t cooking manufacturers misleading us, by the way. The measurements are always taken at the rim of the pan. 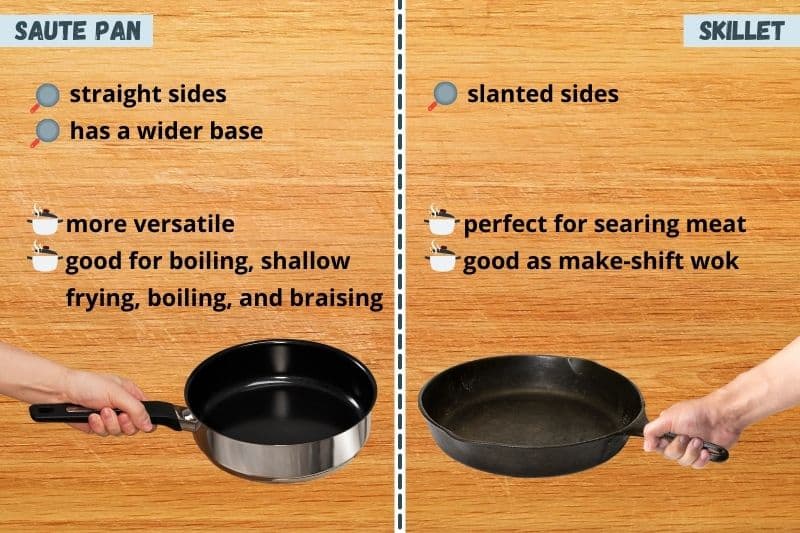 Saute pans also come with a lid, unlike skillets. The lid means that a saute pan can be used for a lot more cooking tasks.

While saute pans and skillets are both amazing for searing meats and frying steaks, for example, saute pans can also be used for reducing sauces and even boiling veg and things like that.

Skillets are great for a lot of tasks, too, though. Thanks to the slanted sides, they can be used in place of a wok for stir-frying. They are perfect for any cooking tasks that involve moving the food around a lot during the cooking process, for example.

As you can see, the differences between these pans are pretty small, and both can be used for very similar cooking tasks, so which one should you choose?

When to Use a Skillet Rather Than a Saute Pan

One of the biggest reasons that skillets and saute pans get confused so much is because they can almost be used interchangeably.

We have both a skillet and a saute pan in our home, and we honestly grab whichever one is closer to us when we are cooking steaks, fish or quick-frying veg.

We love both and wouldn’t be without both in our kitchen. If I had to choose between a skillet or a saute pan, I would choose a saute pan, and here’s why. 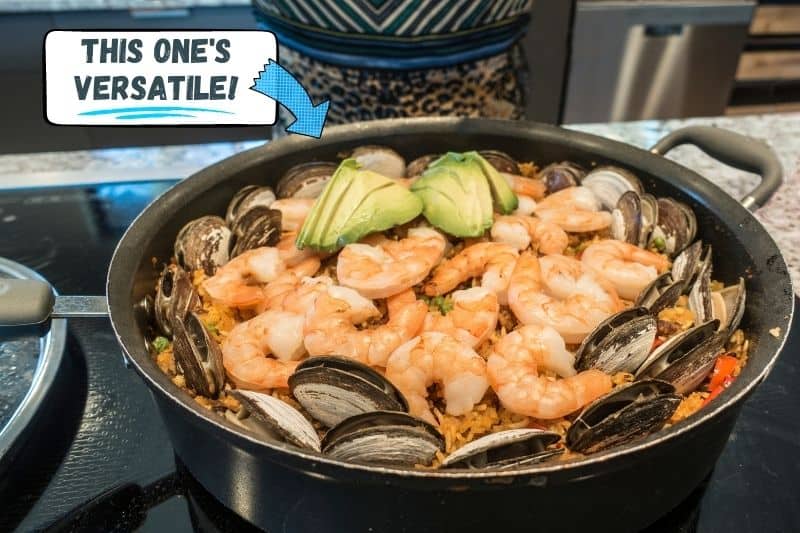 Saute pans are much more universal than a skillet. While skillets are perfect for searing meats and using as a make-shift wok, saute pans can do all of this and more.

Saute pans can be used for stir-fries, shallow-frying, poaching, boiling, braising, and so much more. They also have a huge cooking surface.

Most of the time, we cook for two people, but when we have friends over, we know that our 12-inch saute pan can cope with the additional mouths to feed.

In my opinion, skillets and saute pans both have a place in our kitchens, and we certainly wouldn’t be without both in our kitchen. We use both almost every day, and we use them both for very similar cooking tasks. Having both a skillet and saute pan in your kitchen is really handy.

We have all of the best saute pans and skillets available in the UK right now here on Chef’s Pick.

So, make sure to check out our recommended skillets and saute pans before you leave. We also have other articles about saute pans if you want to see what these pans are capable of!