Oatmeal can refer to either raw, dry oats or dishes prepared by boiling oats.

When Americans talk about oatmeal, they are usually talking about the same thing that British people call porridge.

Technically, porridge can refer to any grain or cereal that is boiled in water or milk. However, in the UK, porridge almost always refers to something made from oats.

To American ears, the word porridge sounds old fashioned, like something people would eat in a nursery rhyme or fairy tale. Usually, Americans will refer to this popular breakfast food as oatmeal.

The suffix ‘-meal’ found in the word ‘oatmeal’ predates the English language by thousands of years. It likely originated from the Proto-Indo-European word ‘mele-‘, meaning “that which is ground” or “to grind”.

These days, most UK consumers are more familiar with the terms rolled oats, dried oats, porridge oats or simply, oats, instead of oatmeal. 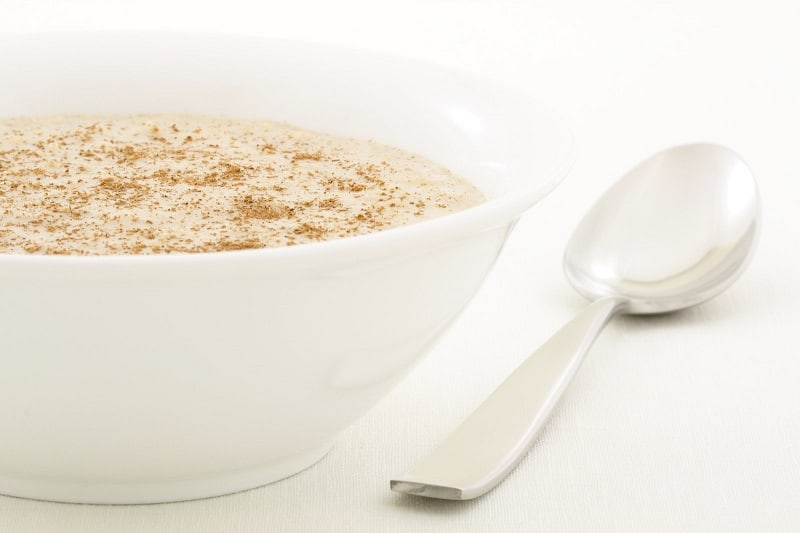 Other UK Words for Oatmeal

The five countries that make up the UK each have distinct languages and regional dialects. Because of this, people around the UK use a wide variety of words for oatmeal.

Here are some common synonyms for oatmeal used in Northern Ireland, Scotland, Wales and England.

Most of the UK’s oatmeal is sourced from Scotland. Oats are Scotland’s national grain. They’re used to make haggis, as well as two porridges, brose (toasted oatmeal with butter) and gruel (a cold, plain porridge).

The most common term for oatmeal in Scotland is oatmeal.

In Scots Gaelic, spoken predominantly in the Scottish Highlands, the terms coirce and min-choirce are used to describe oats and oatmeal respectively.

Oatmeal has played a vital role in the development of Wales. In the past, Welsh oatcakes (bara ceirch) were frequently consumed as a cheap, filling source of nutrition.

Like all nations of the United Kingdom, the English word oatmeal remains the most common word for oatmeal in Wales.

Oats and oatmeal-related products are produced in the region. One of Northern Ireland’s oldest brands, White’s, has processed and sold oats for over 175 years.

Oatmeal is almost always referred to as oatmeal in Northern Ireland, in both English and Ulster Scots. The Gaelic word min choirce is synonymous with oatmeal.