Potatoes are one of the nation’s favourite foods. They’re versatile and make a cracking side dish for pretty much any main meal imaginable.

Mashed potato is one of the best ways to prepare these starchy vegetables. It’s creamy, fluffy, and truly delicious.

It’s also super simple to make; most people make mash by cooking white potatoes and adding a dash of cream and a knob of butter.

As it turns out, baking potatoes are one of the best potato varieties for mashing!

Keep reading to find out the reason for this and how you can make mashed potatoes from baking potatoes. Plus, discover other uses of your leftover baking spuds.

Why Are Baking Potatoes the Best for Mash?

Baking potatoes are known for their large oblong shape and brown skin. Traditionally, they’re baked whole in the oven, hence their name. However, they’re also an excellent choice for anyone wanting light and fluffy mashed potatoes.

One reason baking potatoes are so good for mash is their high starch content which helps make the potatoes really fluffy for an unbeatably light airy texture.

It is this starch that leaves you with a fluffy texture after baking too, and a must for the lightest mashed potato going.

Whenever you mashed cooked potatoes, moisture is released from inside.

Adding cream and butter before all the moisture has been released can cause your mash to have a runnier consistency than desired.

But because baking potatoes hold onto less liquid, this excess moisture is less likely to have any real impact on your finished product. This also makes for a more flavourful end result.

Should You Boil or Bake Potatoes for Mashed Potatoes?

The preparation technique used to cook potatoes prior to mashing is hotly contested among cooks. Some people prefer boiling their potatoes, whereas others swear by baking them.

But which technique is best for the creamiest mash potato possible when using baking potatoes?

Baking potatoes are traditionally baked in the oven with their skins on. If you have time, this is the best way to prepare potatoes for mashing according to the BBC.

Cooking the potatoes whole and in the oven means no extra water is absorbed during the cooking process. This means your mashed potato will be light, fluffy, and flavourful every time.

Bake in the oven as usual before halving lengthways, scooping the inside into a pan, and mashing with cream and butter.

Peel the baking potatoes beforehand and chop them into smaller pieces to speed up the cooking time.

You then need to bring a pan of water to the boil, add the potatoes, and cook for 15-20 minutes.

Drain the potatoes and let them sit for a couple of minutes to lose the excess water from boiling, before mashing and cream and butter. This is a great time-saving technique for those in a rush. 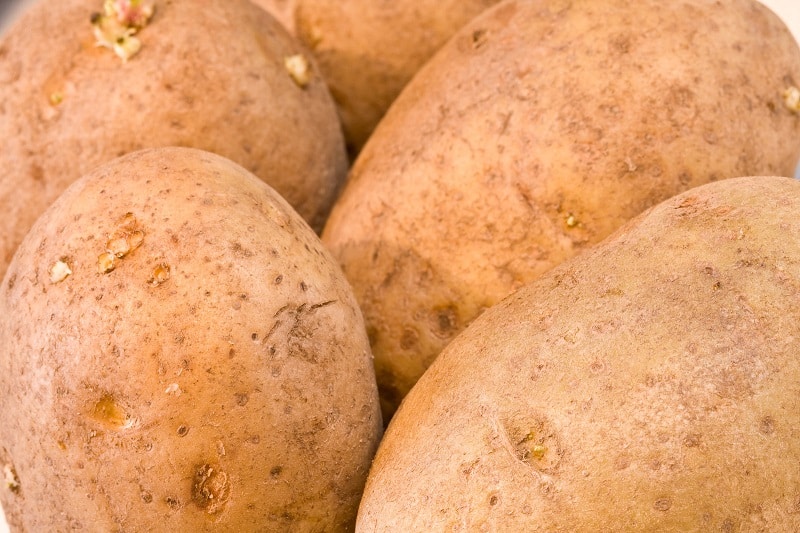 What Else Can I Use Baking Potatoes For?

Mash potato isn’t the only thing you can do with leftover baking potatoes. You can use these jumbo-sized spuds for pretty much any of your favourite potato recipes!

Chips are great when made with baking potatoes, especially if you like them chunky. Thanks to the large size, you can easily chop your jackets into chunky chips to bake or fry.

They also make for cracking roast potatoes. Peel the skin off your jackets before chopping them into smaller chunks and roasting them in the oven.

Baking potatoes, unfortunately, don’t fare as well in dishes like soup. Their low moisture content means they tend to absorb the liquid and lose their consistency.

For chunky pieces of potato, you’re better off sticking to waxy new potatoes or red potatoes.

You can use baking potatoes to thicken soups though, and their high starch content makes for a wonderfully creamy consistency.