The Valencian dish paella is extremely popular in the UK and is found on most supermarket shelves.

However, the classic mix of rice, saffron, vegetables, and seafood is undeniably better when cooked from scratch.

When made the traditional way, paella is cooked and served in a large shallow pan. As such, paella for one is rarely ever an option! In fact, you’re nearly always left with leftovers.

Not wanting to waste food, many people wonder what to do with leftover paella. And more specifically, can you freeze paella?

As long as it’s done correctly, there is no harm in freezing paella and reheating it at a later date. It’s a great way to reduce waste and ensure you’ve got delicious food at your fingertips.

Keep reading to find out the safest technique and any restrictions you need to be aware of.

How Can You Freeze Paella?

Paella can be frozen for up to two months and reheated, meaning you can enjoy the taste of Spain months after putting in the hard work cooking.

However, freezing paella has to be done correctly. Failure to do so could mean the dish isn’t safe for consumption and could make you sick!

Follow these steps for a fail-safe method guaranteed to work every time:

Of these steps, two and three are vital in terms of food safety. This is because rice may contain bacteria that can lead to food poisoning when consumed.

The bacteria multiply at room temperature, so encouraging the rice to cool as quickly as possible prevents these bacteria from multiplying and producing toxins.

As soon as the paella has cooled to room temperature, it needs to be frozen to further prevent any toxins from forming.

Allowing the paella to properly cool before freezing is also important for preserving the dish at its finest.

This is because if the rice is not cooled before freezing, condensation will form on the inside of the container. This will make your paella soggy when reheating and less flavourful than the original.

Can Your Freeze Seafood Paella?

You can freeze seafood paella using the aforementioned method. However, there are a few extra considerations you need to take into account.

Firstly, you shouldn’t freeze seafood in shells. It is recommended to remove all shells from clams, mussels, and other seafood before freezing.

This can be done post-cooking when you are portioning the leftovers into containers. Be speedy so the rice doesn’t sit around at room temperature for too long while you work.

Moreover, if the fish you used for your paella was frozen before cooking, you need to be careful about refreezing it.

According to the NHS, you can cook frozen fish that has been defrosted and refreeze it safely.

You can also refreeze cooked fish once, but never more than this. But if in any doubt, don’t freeze your paella. Incorrectly refreezing fish, seafood, and prawns could make you sick. 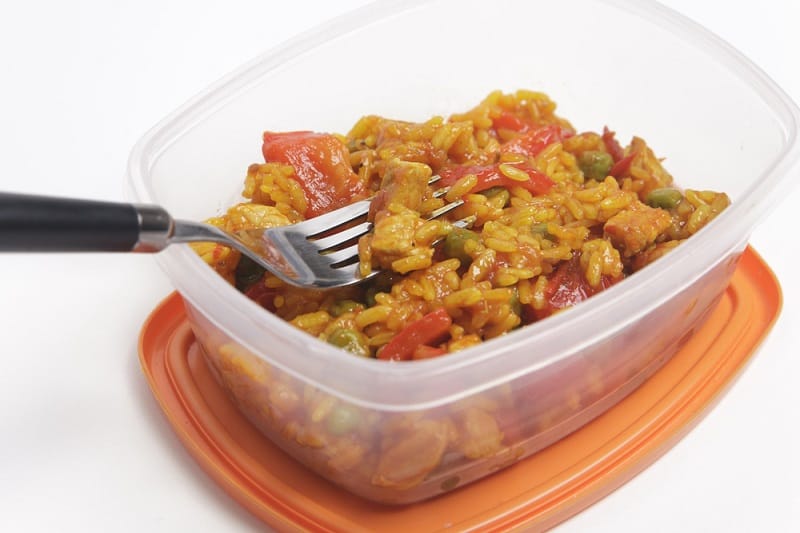 Can You Freeze Chicken and Chorizo Paella?

Chicken and chorizo paella is one of the most popular types of paella in the UK.

However, you might not need to freeze this type of paella! Chicken and chorizo can survive much longer in the fridge than seafood paella, so it might be better to store it here.

As long as you cool the dish quickly and refrigerate it promptly, chicken and chorizo paella can last for up five days in the fridge. This is compared to a maximum of 24 hours for seafood variations.

Can You Reheat Paella?

Having perfectly frozen your paella, you’ll want to know the guidelines on reheating it.

Like freezing, this process must be done correctly. Reheating paella too quickly can cause the bacteria on the rice to multiply and make the food unsafe to eat.

Follow these steps and you won’t run into any food poisoning-related issues:

Always make sure that the rice is steaming hot all the way through before tucking in. This will further help limit the risk of contracting food poisoning.

Also, note that rice can only be reheated once. Anything you don’t eat now needs to be thrown away.

This explains why it’s so important to freeze paella in meal-sized portions—you won’t want to put any of this delicious Spanish meal to waste!