If you fancy a new set of pans but aren’t too sure about which pans are oven safe, you’re in the right place.

Strictly speaking, most pans can go in the oven, but not all pans should. Let’s explore why shall we?

Can Non-Stick Pans Go in the Oven?

While most non-stick pans can go in the oven, their coatings usually can’t cope with the high heat of an oven for a long enough period of time that would make using them in the oven practical.

For example, most non-stick pans must not be used past 170-200 degrees Celsius. So searing meat and fish in the pan and then chucking it in the oven is basically out of the question if you’re using non-stick cookware. 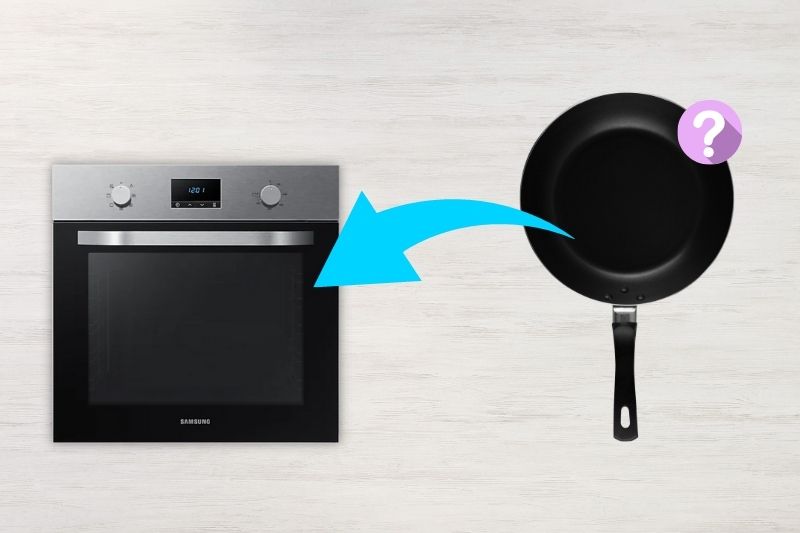 Also, most non-stick pans have plastic handles. The plastic shouldn’t melt in the oven (unless the pan was never intended to go in the oven).

Still, certain plastics can let off fumes when heated up (as can non-stick coatings), and you don’t want your steak to taste like you left it in the wrapper, do you?

By all means, get a non-stick pan for your kitchen, but keep it on the hob where it belongs.

Can Cast Iron Pans Go in the Oven?

Yes, cast iron pans and ovens go together as if they were made for each other. Likely because they were!

Cast iron has been in kitchens for hundreds of years now, long before conventional stovetops were a thing. 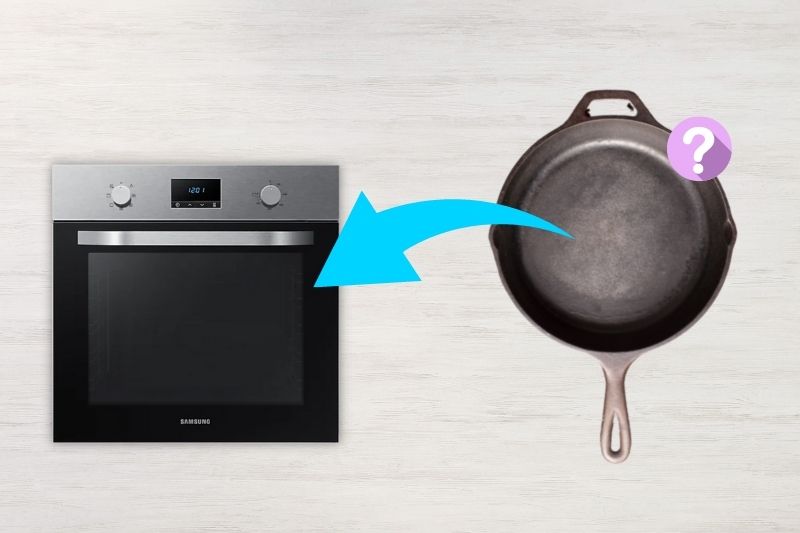 So, cast iron has been in and out of ovens more than you’ve had hot dinners! A cast-iron skillet is a fantastic choice for the pan that you’ll be transferring from the stove to the oven. It heats up nice and evenly and keeps this heat throughout the cooking process.

Also, there are no plastic handles to worry about and no non-stick coatings to fuss over. Sure, cast iron is seasoned, but a few rounds in the oven each week will actually help the seasoning bake into the surface.

The only true downside to cast iron is the weight. Cast iron pans are extremely heavy and moving them from the hob to the oven with food in can be tricky.

What About Carbon Steel Pans?

Carbon steel pans are another solid choice for a pan you can use to cook on the hob and in the oven. These are what chefs use for this exact reason.

There is no non-stick coating to destroy, no plastic handle that can become all melty, nothing like that at all. You have a good quality pan with a metal handle riveted to it, and that is about it.

Carbon steel heats up nice and fast and is really good at retaining this heat despite being nice and thin. The thinness of these pans is what makes them a good substitute for cast iron. They are much lighter but perform the same tasks as cast iron.

This De Buyer carbon steel pan is a great choice. The price is fantastic, and it has a really nice profile that you’ll love cooking with. The only downside to carbon steel is that the pans can sometimes deform in the oven. This is due to the pan being very thin.

So, there go. If you’re looking for a new pan that can go in the oven, we would highly recommend cast iron or carbon steel. Either will work extremely well, but if you have concerns about the weight of cast iron, grab a carbon steel pan.

If you don’t want the pan to deform, get cast iron. Both are extremely well priced and will be a workhorse in your kitchen.

You can find out more about cast iron and carbon steel cookware on Chef’s Pick too. We’ve covered both pans in separate articles and also have articles about seasoning cast iron too.