If you’re looking for an electric cooker at a fantastic price, you’re in the right place. We have searched high and low for cookers that will bring a lot of style and cooking power to your kitchen.

Just because these cookers are under £500, that doesn’t mean that they aren’t great. In fact, many of the cookers below are well below this price, and they offer everything you’ll need in a cooker will no compromises at all.

Best Electric Cookers Under £500 in the UK 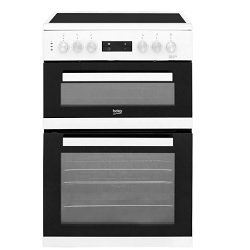 This Beko cooker has a lovely, spacious main oven and a second oven that is also a good size. Overall, you get over 100 litres of cooking space in this oven. The main oven is also fan assisted, so the two shelves can be used anywhere in the oven, and you’ll still get even heat.

The second oven is a conventional oven and a grill. This makes this cooker ideal for chefs and bakers alike.

Many cooks note that this hob does mark easily. Of course, this is a ceramic hob, and these can scratch and mark easily with use.

Also, some say that the door opens a bit too low to the ground for their liking; perhaps this is something you’ll get used to.

Overall, though, most people love this cooker and get along with it just fine. 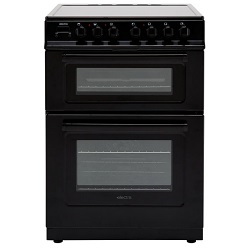 This Electra cooker could win a couple of beauty contests on the way to your kitchen. It’s a lovely shade of black that will work in just about any kitchen.

The controls are nice and simple to use, with very basic functions that just about anyone will be able to figure out. Plus, the ceramic hob has a nice, lifted surround which prevents pots and pans from falling on the floor.

One of the biggest complaints about this cooker is the small ovens. The large oven is 56 litres, and the second oven is 35 litres.

We wouldn’t recommend this cooker for a family, but if you’re a couple or live alone, the space shouldn’t be an issue. In fact, the ovens will heat up a bit quicker for you. 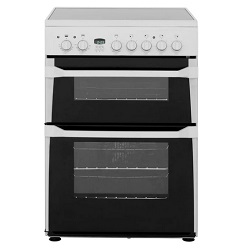 This next cooker may not win too many beauty contests, but what it lacks in style, it makes up for in cooking power. That isn’t to say that this cooker doesn’t look nice, but it isn’t the most stylish on our list.

However, everyone loves the cooking power of the ovens and the hob on this one. The ovens heat up quickly, and the fan-assisted main oven works a treat. The hob is also really powerful, and there are very easy to see and use controls. 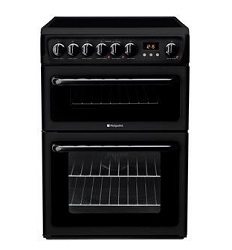 The Hotpoint Newstyle is a range of cookers that have just as much style as they do cooking power. This one looks great and will add a lot to any kitchen, but we feel the slightly farmhouse style to this cooker would look great in a modern kitchen.

A few bakers have noted that the fan in the main oven turns off once the oven reaches the temperature you’ve set. While this is great for everyday cooking and can save a bit of money, bakers find it difficult to bake cakes and biscuits and stuff and feel that an override function would be great. However, if you’re just after a cooker for family meals, the large main oven and simple controls are ideal. 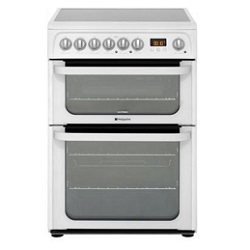 My dad has this cooker, so I can say that it can cook a slap-up meal! My dad has owned this cooker for about two years now and hasn’t had any problems with it. The controls are still very visible, and they are really easy to use.

Sure, this doesn’t have tonnes of functions, but that actually makes this cooker nice to use. You set the temperature, it reaches that temperature, and that’s it.

The size of this cooker is plenty big enough for a family, but couples and people living alone will also find this cooker wonderful too.

Also, the white frame is really easy to clean, and as long as you’re careful, the ceramic hob doesn’t get too scratched either. This is a quality cooker. The grill pan supplied could be a bit bigger, but other than that, it is great.

How to Choose Your Cooker

Choosing a cooker can be tricky, and I won’t pretend to know what all of you want out of a cooker. Some people want a cooker that can be used for baking and cooking; I know my partner does. And others, like myself, just want a simple to use cooker with simple controls that heats up quickly.

While I can’t tell you what cooker is perfect for you, I can offer some things to think about during your quest for your cooker.

When we talk about size, cookers can vary a lot. Now, all of the cookers above were 60 cm wide, which is the standard cooker size. Others are 50 cm, 90 cm or even 110 cm.

As you’re looking at a list of electric cookers, you probably already know what fuel type you’d like. Still, it’s worth mentioning.

Cookers come in a few fuel types: gas, electric and induction. For the easiest and cheapest installation of your new cooker, it is best to match the fuel type you already have. Replacing an electric cooker with another electric cooker is far easier than replacing it with a gas alternative. Of course, if you really want gas, you can do it, but you may need to run gas lines and this may cost a pretty penny.

The same goes with replacing a gas cooker with an electric one. While it certainly isn’t impossible, it can cost some money. So, it’s worth factoring in these costs when budgeting for your cooker.

As I said, my partner loves baking. So, her ideal cooker would have some functions that made baking easier, but it could also be used for everyday cooking. I don’t bake, but I love to cook, so the oven I choose doesn’t need any fancy functions, just simple controls that get me from A to B quickly.

If you enjoy a certain type of cooking or are an avid baker, try and find a cooker in your price range that makes your cooking passion easier. You can then focus on your recipes, and the cooking will take care of itself.

A lot of the cookers above have an A energy rating, but one or two of them had a B rating. B is not a terrible energy rating by any means. However, if you’ve gone from an A-rated cooker to a B-rated cooker, you may notice a slight increase in your energy bills.

Of course, most of us are replacing cookers that are 5-10 years old, so we likely won’t notice any increase, but it is still worth considering the energy rating. The cooker may be a good deal upfront, but it may cost you a bit more in the future.

We hope you found your next cooker above. If we had to choose a cooker from the ones above, we’d go with the Beko KDC653W. While many users say the hob marks easily, this could be that they aren’t used to ceramic hobs. As long as you’re careful, the Beko above will do wonders in your kitchen. It is a quality cooker at a great price.

While you’re here, why not check out our lists of pots and pans too? Add some quality cookware to your kitchen to use on your new cooker.