Lots of home cooks grab the frying pan for most cooking tasks on the hob. If something needs to be shallow fried or seared, chances are, we will all grab a frying pan, particularly in the UK.

However, many homes in the UK also have a wok just sitting in the cupboard, minding its own business. A wok is a brilliant cooking tool when used for the right tasks, but when is the right time to bring out the wok?

Well, today, we’re looking at when and why to use a wok instead of a frying pan.

When to Use a Frying Pan and a Wok

A frying pan is the best choice if you are searing a steak, for example. The frying pan heats up nice and evenly and is a nice flat surface to get a good sear on your meat.

However, if you’re cooking lots of veg along with your steak (in a stir fry, for example), a frying pan isn’t the best option. You see, the reason that steak cooks so well in a frying pan is that the bottom is flat. This allows the steak to sit in a pool of oil and get nice and seared and beautiful.

So, in the case above, the frying pan can be used to cook the perfect steak; you can then use a wok to cook the veg, create a lovely sauce and then add strips of the steak into the pan to coat it in the sauce and serve.

Differences Between a Frying Pan and a Wok 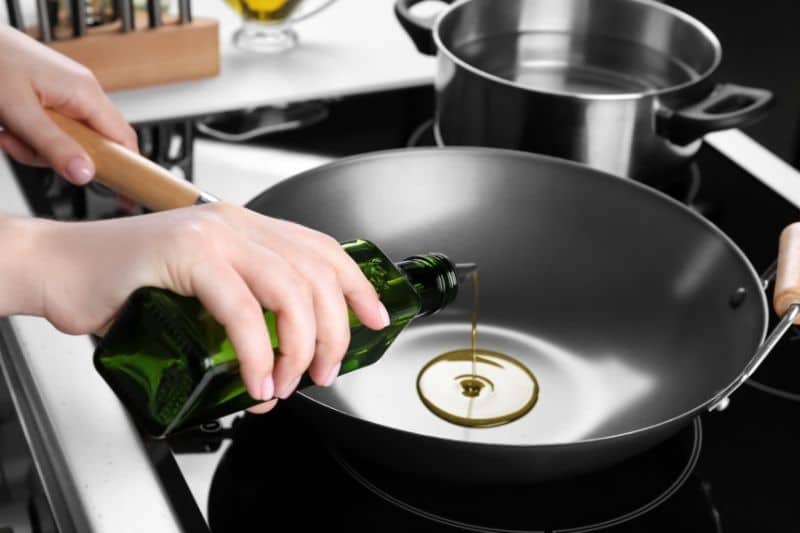 You need hardly any oil in a wok, especially if you have seasoned the wok prior to cooking.

Traditionally, you run a small amount of oil around the rim of the wok when you are ready to start cooking, and this is enough to coat the entire wok with oil but not enough to make your food oily.

Throughout the cooking process, the oil will settle into the bottom of the wok. So, you can remove most of the food without much oil on it at all.

Of course, the oil traditionally makes up part of the sauce that is added during the cooking process. Still, if you want to be really healthy, you can skip this step and remove the food without coating it in the oil at the end. 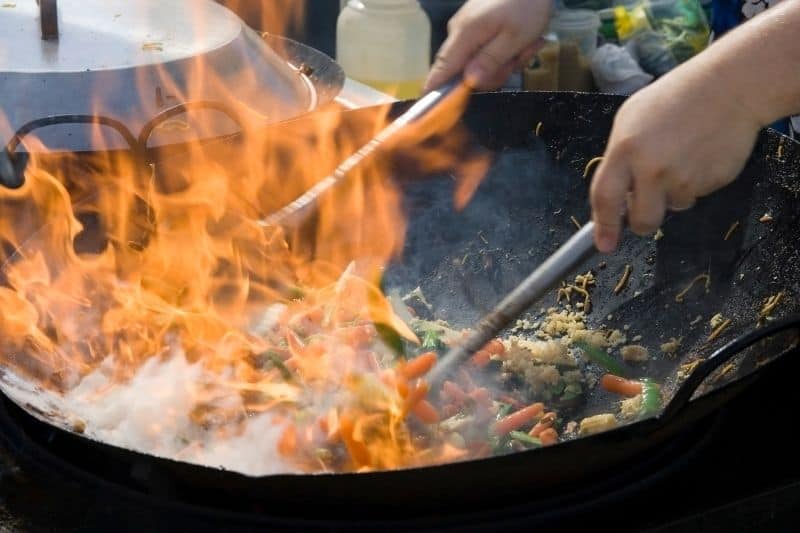 Most works are made from thin carbon steel; at least, traditional woks are. This thin steel heats up very quickly and evenly, so you can start cooking very quickly. However, it also means that the entire surface of the wok is extremely hot throughout the cooking process.

This means that the stuff you are cooking doesn’t need to be in the bottom of the wok to cook. So, you can really pile in the veg and meat in the wok and know that it will thoroughly cook everything.

3. Not frying, but stir-frying 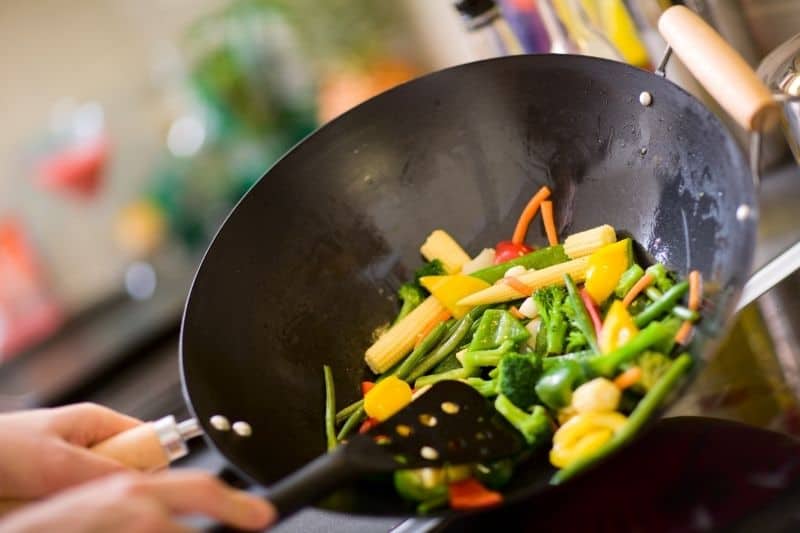 A common misconception about woks and frying pans is that they do the same job. However, a wok stir-fries, it doesn’t fry.

Frying is intended to make meat and veg crispy and seared nicely, and this involves a lot of oil. Stir-frying, on the other hand, is intended to cook food very quickly while stirring it quickly.

Stir-frying is a very old Chinese cooking technique that is more like sautéing than frying. It uses extremely hot oil (but a very small amount), in a very hot wok, to cook veg and meat in minutes in a very healthy way.

Why Use a Wok Instead of a Frying Pan?

As you can see, woks are awesome and shouldn’t be left in the cupboard gathering dust. Here are some tasty dishes that you should be using a wok for if you have one:

So, when should you use a wok instead of a frying pan? Well, woks are perfect for really quick meals and are a one-pot wonder that is very healthy for you.

Woks allow you to stir fry veg and meat in minutes and introduce sauces directly into the pan, coating all of the food nicely. They are very fast, healthy and a lot of fun to cook with.

Woks were designed for cooking stir-fries, but not the basic stir-fries that we cook in the UK. Check out this wok recipe book. It has 400 amazing recipes perfect for woks. It will add loads of incredible dishes to your arsenal that are easy and healthy.

If you don’t already have a wok, check out our roundup of the best carbon steel woks here.