If you are redesigning your kitchen or just need a new hob, you may be very tempted by an induction hob.

Induction hobs provide an unparalleled cooking experience. They are as fast as gas, more controllable than electric, really stylish and extremely versatile too.

But we have loads of articles telling you about how amazing induction hobs are, you don’t need another one! What you need is a list of the best induction hobs on the market right now.

Best Induction Hobs in the UK 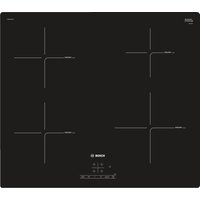 This beautiful Bosch induction hob has a very sleek design. It has touch controls with 17-stage power settings on all four hob rings. Each zone has a boost function to keep water boiling fast. It is also effortless to clean, so it will stay looking stylish and modern for years to come.

So, this induction hob can heat up quickly, looks brilliant and has some awesome functions to make cooking simple and easy. However, it is also very energy-efficient too.

In this price bracket, this Bosch induction hob is really hard to beat. It looks the part and delivers some serious cooking power that most other induction hobs in its class can’t match.

This 4-zone induction hob has touch controls that allow you to easily control all of the zones. It has nine levels of power for each zone, too, so plenty of adjustment.

As this induction hob is unbranded, it means that it can be paired with just about any kitchen equipment and blend in perfectly. Plus, the black surface looks sleek and is very easy to clean too.

Also, the digital display on the hob makes fine-tuning the four zones nice and simple. There is also a control panel lock to keep this induction hob turned off when you need it off. 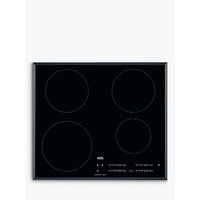 AEG makes some of the best kitchen appliances in the world and so the fact that one of their induction hobs made it on to this list shouldn’t be a shock. This fantastic induction hob has four zones that are very easy to control.

It has a touch panel that allows you to quickly switch to each zone and fine-tune the power settings. Speaking of power settings, each zone can be tuned from 0-10 and has a boost function for speedy boiling too.

Many people love the design of this induction hob. It has a very traditional design for an electric hob, with the zones marked by dotted white lines. However, it has the power and energy efficiency of an induction hob too. 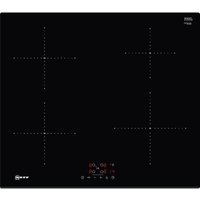 This hob is no exception to this. This four-zone hob offers loads of control with a touch screen display and an LED timer. The control panel is lockable and has a boost function for each hob too.

Neff is renowned for its built quality, sleek design and the functionality of their cooking equipment and they have seriously delivered all of this with this hob. No matter what type of cooking you love to do, this induction hob is the perfect bit of kit. 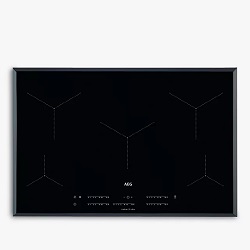 This induction hob from AEG has five zones to choose from. Each zone has very easy to use sliding controls that make boiling, simmering and frying really easy.

There are loads of awesome features on this hob that make it a cooking powerhouse. The PowerBoost function kickstarts a zone and gets your pan of water boiling incredibly fast. However, it then reduces the heat to your chosen setting. So, cooking on this hob is brilliant with this feature, but the features don’t stop there.

There is also the Hob2Hood function. If you buy and install a compatible hood, it will automatically start extracting smells the moment you begin cooking.

You also have the MaxiSense feature, which recognises the size and shape of the pan you’re using and sends heat to the area that the pan is covering. So, it is super safe to use.

How to Choose the Right Induction Hob

There are loads of induction hobs on the market. Some include fancy stuff like a wok burner and touch control.

Some have fantastic safety features like automatic control panel locks and timers for each burner.

So, how do you choose the right hob? Well, finding an induction hob that is perfect for your kitchen is all about you.

Do you prefer a four-burner induction hob, or would you prefer the space a 5-burner hob would provide? Perhaps you are limited on space, and so a four-burner is a must, but you need it to have all of the safety features available.

With so many induction hobs on the market, the perfect hob is out there for you. So, think about things that are important to you, for example:

If you keep these in mind when looking at induction hobs and find a hob that ticks all of your boxes, then you’ll have your perfect induction hob.

We know that buying an induction is a big investment. If this is your first induction hob, you want to get it right the first time. So, think about what you want your hob to have and then find the hob that matches your preferences perfectly. That induction hob may even be on the list above!

Advantages and Disadvantages of Induction Hobs

Is it Worth Getting an Induction Hob?

Whether it’s worth getting an induction hob is really personal preference. However, we can say that induction hobs are amazing. They are so powerful yet controllable.

They are some of the most beautiful hobs being made at the moment and will make your kitchen look fantastic. They are also the most energy-efficient hobs being made right now too. And they are packed full of amazing features to help you cook quickly and easily.

If we had to pick just one induction hob to recommend it would be the Bosch PUE611BF1B. It’s hard to beat for the price, looks very stylish and has some great features.

In this price bracket, this Bosch induction hob is really hard to beat. It looks the part and delivers some serious cooking power that most other induction hobs in its class can’t match.

We hope you found your perfect induction hob above. If you did, make sure to read our articles about owning, installing and learning to love cooking on an induction hob. These hobs are a joy to use (once you learn how) and can make beautiful meals for your family!