One of the cooking-related questions about induction hobs that comes up all the time is whether they scratch easily or not.

Today, we’re finding out whether induction hobs do scratch easily and how you can prevent scratching yours.

While induction hobs can be scratched, if you take care of yours, it’s likely you’ll only ever see minor scratches.

The glass on an induction hob is the exact same stuff as a ceramic hob. It is the guts of the hob that are different.

The ‘glass’ top is a glass-ceramic composite. So, if you’ve ever had a ceramic hob, you will know that the surface can be scratched. However, if you take care of the hob, you won’t be plagued by scratches.

How to Prevent Scratches on Your Induction Hob

One of the best ways to prevent scratches on an induction hob is regular cleaning. After cooking on your hob, make sure there is no food on the hob at all.

Most scratches on any hob are due to placing a pan on food that is on the hob then moving the pan around.

Things like salt are a prime example of this and have probably caused more scratches on hobs than any other food. If there is salt on your hob and you place a pan on top of it, it can scratch the surface.

So, when you are cooking, and you remove a pan from the hob, double-check that there is nothing in the way when you put the pan back down. 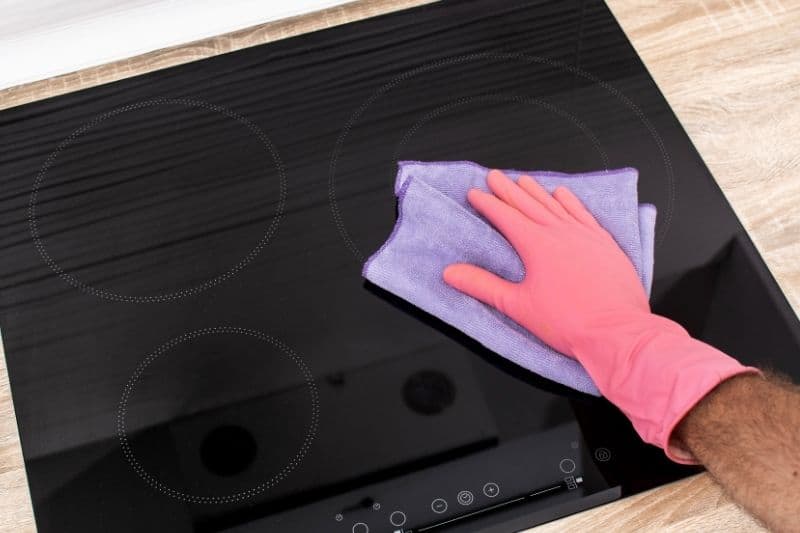 You should also avoid using any pans with damage on the base. However, this is usually quite easy on an induction hob as any damage to the base of a pot will affect its use anyway.

Basically, when you’re cooking, be careful. If you do spill any food on the hob, clean it up before you place the pan on the surface again. That is the best way of avoiding scratches on an induction hob.

Do Scratches Affect an Induction Hobs Ability to Cook?

Minor scratches are also very common on these hobs. They are nothing to worry about, just a part of everyday cooking.

Large scratches and damage, though, could cause the glass to break, but this is rare as the glass-ceramic surface is pretty robust. I wouldn’t go and swing a hammer on my stovetop.

Still, with general cooking use, it would be extremely impressive to do enough damage to break the glass!

We hope this look at scratching induction hobs has been helpful. If you are careful, your induction hob will go scratch-free for a while.

But remember, scratches are really hard to avoid, and they do not affect the cooking capability of your hob, so don’t worry too much. Just enjoy cooking on your induction hob and give it a wipe down after each use.