Ceramic hobs are easy to clean, look great and typically have lots of great safety features. Read on for our roundup of the best ceramic hobs available in the UK in 2019, plus more info on what ceramic hobs are and what you need to consider when choosing one. 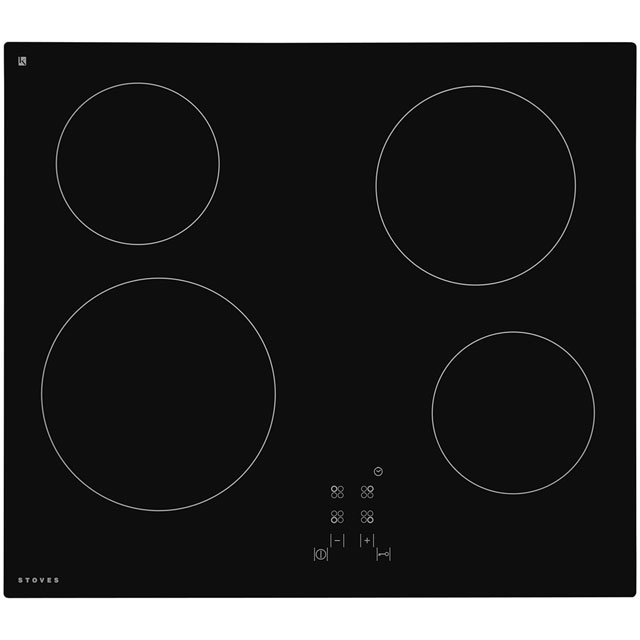 This stylish-looking hob offers four cooking zones that are controlled by touch controls. Since it doesn’t have any raised knobs, it’s very easy to clean.

It has some useful safety features, such as indicators to show when the hobs are still hot, and an automatic shut-off function. There’s also a timer and a control panel lock to prevent kids from turning it on.

This hob is reasonably priced and is made in Britain by a trusted brand. Most users rate it very highly since it’s easy to clean, works effectively and is safe. 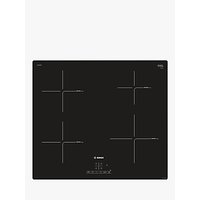 Since the Bosch PUE611BF1B is an induction hob, it heats more quickly and is more energy efficient than the average ceramic hob.

Like most induction hobs, the Bosch PUE611BF1B is fairly pricey, but could be worth it if you want a hob that heats up and cools down quickly (that’s the big advantage of induction hobs).

This hob has four cooking zones and uses touch controls. It has some clever features such as automatic pan recognition, a timer and a boost setting for when you need to cook something quickly.

Unlike most electric hobs, you can quickly change the heat level on the Bosch PUE611BF1B, so you have a lot of control over what you’re cooking. The boost function is great when you want to boil a pan of water quickly. There’s a lot to like about this hob. 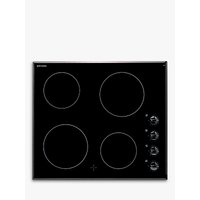 This hob has four cooking zones. There’s a small heat indicator for each zone at the front of the hob, which lets you know when each zone is still hot.

If you want something with knobs rather than touch controls, the John Lewis JLBICH601 ceramic hob is a great choice. It’s a good no-frills hob that comes at an affordable price. 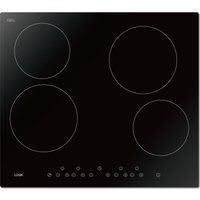 The LCHOBTC16 ceramic hob is a popular product from Currys’ own brand Logik. It’s one of the cheapest ceramic hobs on the market, and could be a good choice if you’re on a budget.

It has four cooking zones with nine power settings, operated by touch controls. It has a safety lock which makes it safe for family homes. There’s also an auto shut-off function and a useful timer.

This hob is a good budget option that works very well for the price and has some useful safety features.

It’s very easy to clean food spills off this hob, but it does accumulate stains and marks unless you really scrub it hard. 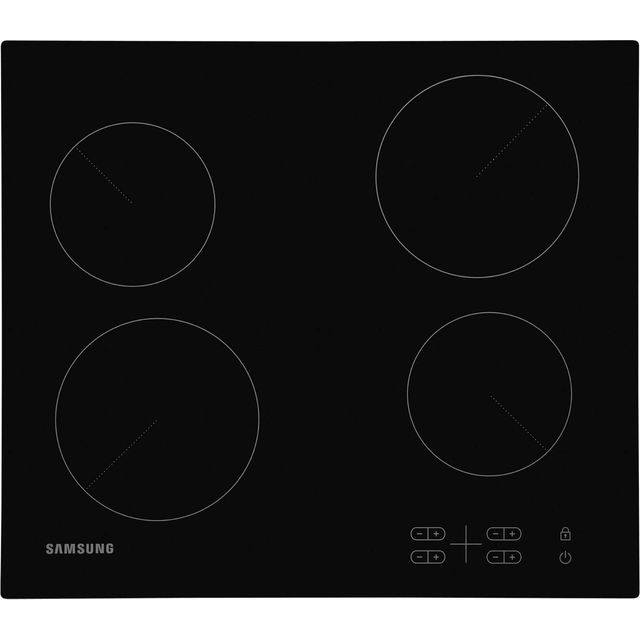 This hob looks smooth and sleek on a kitchen countertop since it uses touch controls. It has four heat zones and features a control panel lock to prevent kids from turning it on.

It heats up quickly and has an auto shut-off function so you it will turn itself off if you forget to switch it off.

The Samsung C61R2AEE is a high-quality product that looks impressive and heats up quickly. One downside is that the rings are quite close together, which limits where you can fit larger pans.

However, there is quite a big gap between the rings on the left and those on the right, so you can still fit two big pans on the hob as long as they aren’t on the same side. 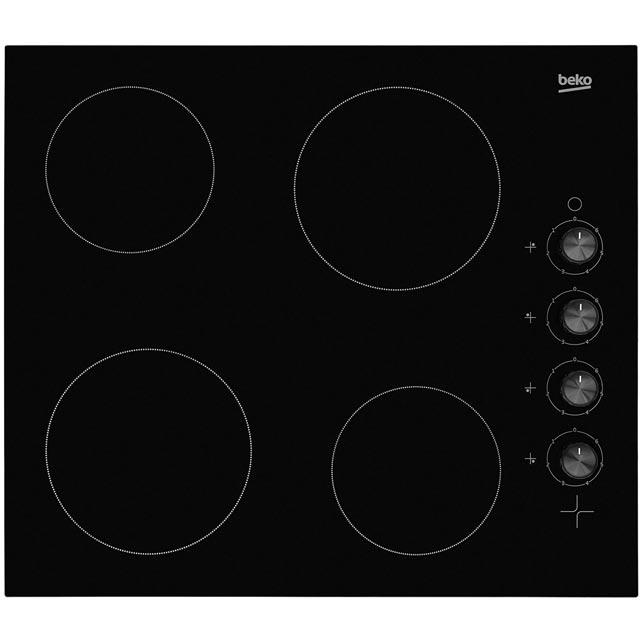 The Beko HIC64102 is another ceramic hob with traditional-style knobs. It could be a good option for people who don’t get on with touch controls, including vision-impaired people who can’t use touch controls.

Like pretty much all hobs, this one has four heat zones. Each heat zone has six power levels and has a residual heat indicator that glows to show you that it’s still hot.

The Beko HIC64102 is a reasonably priced hob with easy-to-use traditional knobs rather than fiddly touch controls.

Like many ceramic hobs, the Beko HIC64102 is easy to wipe clean but can accumulate stains quite easily.

Pros and Cons of Ceramic Hobs

One of the biggest advantages of ceramic hobs are that they are easy to clean. However, you have to be careful not to scratch them. Here’s a summary of their pros and cons:

What is a ceramic hob?

A ceramic hob is an electric cooker hob that has a ceramic veneer, making it easy to keep clean. The name ‘ceramic hob’ refers to the material use, not the way the hob works. The other main type of electric hob is referred to as a ‘solid plate’ hob.

Is a halogen hob the same as a ceramic hob?

Halogen hobs use infrared radiation to heat food and also produce a red light that lets you know that they’re hot.

What is the difference between induction and ceramic hobs?

Induction hobs create a magnetic field between the hob and the pan. They are more efficient because they only heat the pan, not the hob itself. However, they only work with certain types of pan.

Induction hobs often use a ceramic surface, and can therefore be described as a type of ceramic hob. However, not all ceramic hobs are induction hobs.

A simple way of explaining it is that induction hobs are fancier, more technologically advanced and energy-efficient ceramic hobs.

If you wear a pacemaker, there’s a risk that the magnet in an induction hob could interfere with the pacemaker—see the British Heart Foundation’s advice here.

Can you get a ceramic hob with knobs?

Many ceramic hobs use a touch interface on the hob’s surface rather than traditional knobs. However, a few ceramic hobs have knobs, for example the John Lewis JLBICH601 and the Beko HIC64102.

Having raised knobs rather than touch controls makes the hob a bit harder to clean, but if you prefer them to touch controls it might be worth sacrificing the ease of cleaning.

Do you need special pans for a ceramic hob?

If your ceramic hob is an induction hob, you will need pans made from magnetisable metal (see some recommendations here).

If your hob isn’t an induction hob, any pan will work but you should avoid copper and exposed aluminium pans, as they can damage the hob’s surface.

The best pans for a ceramic hob are those made from hard anodised stainless steel or heavy-gauge coated aluminium.

Are ceramic hobs expensive to run?

We couldn’t find any data directly comparing the cost of running ceramic hobs against other types. Ceramic hobs are more expensive to run than induction hobs as they are less energy efficient.

Ceramic hobs are made from strong ceramic glass which does not break easily. You’re only likely to break a ceramic hob if you drop a heavy object on it, for example if a pan or jar falls onto the hob from a shelf or cupboard above it. However, ceramic hobs can scratch easily.

Can you replace the glass on a ceramic hob?

If your ceramic hob is cracked, the hob is no longer safe to use and needs to be either repaired or replaced.

In theory you could buy a replacement glass part and install it yourself, but this normally costs almost as much as buying a new hob, and unless you’re an experienced professional you may not attach the glass correctly. For most people it will make more sense to buy a new hob.

If we had to pick just one product to recommend as the best ceramic hob in 2019, it would be the Stoves SEH600CTCMK2 since it’s reasonably priced, performs well and is easy to clean, making it very popular with users.

We use cookies to ensure that we give you the best experience on our website. If you continue to use this site we will assume that you are happy with it.Ok