Slow cookers are a great addition to any kitchen. You can whip up a delicious meal without much time or effort; simply put all the ingredients in the slow cooker and let it do the rest! If you want to save money as well as time, you might consider cooking with frozen ingredients.

But there is a split opinion when it comes to chicken. Can you cook chicken from frozen in a slow cooker? Or is this a recipe for disaster?

Although this would be a time-saver, cooking chicken from frozen is a huge no-no. And it’s not just us saying that – the UK Food Standards Agency also agrees it’s potentially unsafe and instead advises defrosting in the fridge overnight.

Let’s dig deeper into why!

Why Shouldn’t You Cook Frozen Chicken in a Slow Cooker?

Raw chicken is often contaminated with harmful bacteria. When we cook the meat these bacteria are killed, meaning we can enjoy a healthy dose of protein without being concerned about getting food poisoning.

According to the UK Food Standards Agency, chicken that reaches 70°C is safe to eat. Therefore, you can cook chicken from frozen, as long as the cooking times are adjusted accordingly to reach this temperature.

But there is one huge caveat: you should never cook chicken from frozen in a slow cooker. As the slow cooker cooks things – well, slowly – the chicken will spend a lot of time in the “Danger Zone”. This is a term used by the UK Food Standards Agency to describe temperatures from 8°C to 63°C. This “Danger Zone” is the perfect temperature for bacteria to breed and multiply.

In most cases, the bacteria will die once the chicken is properly cooked to 70°C. However, as the bacteria multiply, they also produce toxins. Unlike bacteria, these toxins might be resistant to heat.

Cooking chicken in a Crockpot can mean these harmful toxins are still present in your finished meal. Consuming them will make you sick! 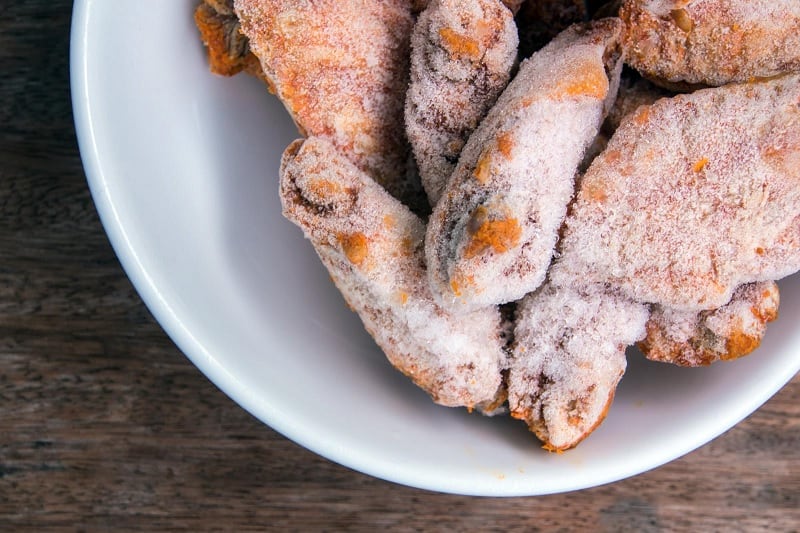 How Can You Safely Cook Chicken from Frozen?

Despite some slow cookers claiming it is safe to cook chicken from frozen, we’d advise strongly against it.

Stick with throwing thawed chicken breast in your Crockpot instead! But if you are short of time you can minimise the risk of food-borne illness by controlling two things: temperature and timing.

As per the recommendation given by the UK Food Standards Agency, check that the internal temperature of all the pieces of chicken is at least 70°C before serving. This confirms all harmful bacteria have been killed.

The only way to test this accurately is with a meat thermometer but usually requires you to up the recommended cooking time by 50% or more.

Cooking with small pieces of chicken is also a must when using frozen poultry in a slow cooker. The smaller the pieces, the less time each will spend in the “Danger Zone”.

This means that fewer dangerous toxins will be lurking around which could spoil your meal. But beware – there is still some risk with cooking frozen chicken, so the choice is yours!