Gammon is meat from the hind legs of a pig, the same part of the animal that bacon is taken from. It is a popular meat joint that lends itself to a variety of food dishes.

It can often be seen as one of the meat options at a carvery and works well as the main meat for a Sunday dinner. It can also be sliced and eaten cold with a potato salad or eaten with mustard in a sandwich.

Ham and gammon are often confused, but they are essentially the same joint of meat.

Ham refers to a dry cured gammon joint that can be eaten as it is and is ready to eat, whereas gammon is the uncooked version.

Freezing gammon is a convenient way to store it. If you forget to defrost it, it can be helpful to understand the ways in which it can be cooked from frozen.

Gammon can be safely cooked from frozen in a variety of ways.

Can You Cook Gammon from Frozen in a Slow Cooker?

Yes, gammon can be cooked from frozen in a slow cooker. Your slow cooker needs to be big enough to fit the whole joint in with the lid fitting well to the slow cooker.

Frozen gammon will take approximately twice as long as fresh gammon to cook through, so it can take up to 12 hours for it to cook.

It is important to use a meat thermometer to check the inner temperature of the gammon and to plan so that it is cooked in plenty of time. 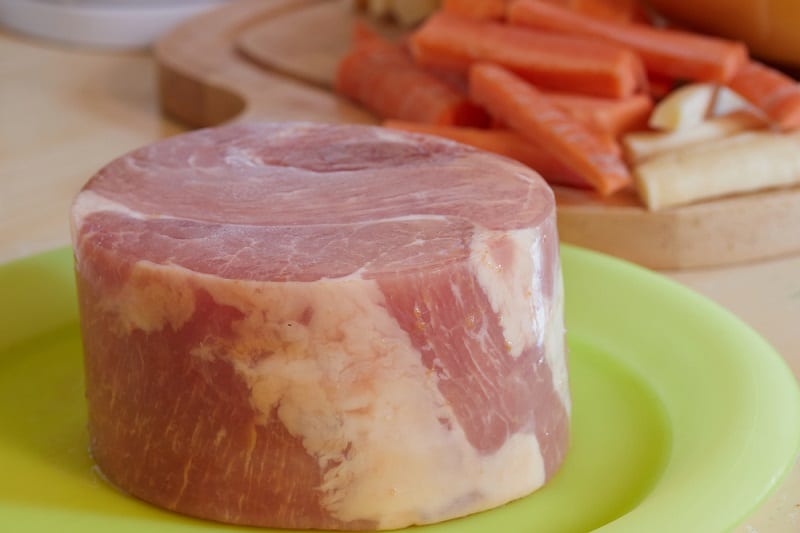 Can You Cook Gammon from Frozen in the Oven?

Yes, you can safely cook gammon from frozen in the oven.

Oven cooking frozen gammon is a much quicker way of cooking it than slow cooking, but it does still require some thought, as the amount of time the gammon takes will depend on the size and weight of the joint.

As a rough rule you should allow 18-25 minutes per pound (450g) of gammon. Lightly cover the gammon in foil to prevent the top from burning and use a meat thermometer to check that the join is cooked through before serving.

Frozen gammon requires 50% more cooking time than fresh gammon and so it is important to get the oven temperature right. If the temperature is too high, you risk the joint being overcooked on the outside. A good temperature is about 160 degrees Celsius.

Can You Cook Gammon from Frozen in a Pressure Cooker?

Pressure cookers have seen a resurgence of late because the speed with which they can cook food makes them a convenient method of cooking.

It is the speed of the method that makes it great for cooking frozen gammon. A frozen gammon joint can be cooked through in as little as 35 minutes in a pressure cooker, providing it is cooked on high.

You can add flavour to the gammon joint directly in the pressure cooker and have a delicious, cooked joint quickly and easily.