Nothing quite beats sausages as a dinner staple that can be eaten in so many ways.

Sausage casserole, toad in the hole or even an all-day breakfast. Yum!

Sometimes though, we get an urge to make a sausage-based dish but haven’t the time to go and buy some. And that’s where frozen sausages come into their own.

Below we’ll look at the different ways in which sausages can be cooked from frozen.

Can You Cook Sausages from Frozen in an Air Fryer?

Shop bought frozen sausages are perfectly safe to be cooked in an air fryer from frozen, in fact it’s a really good way of keeping them crispy and low in fat.

To cook sausages from frozen in an air fryer simply pre-heat the air fryer and add a couple of squirts of spray oil to stop the sausages sticking.

Frozen sausages will take a little longer to cook than fresh ones in the air fryer so adjust cooking times as needed.

Your average frozen Cumberland sausage will be cooked in about 12 minutes. Many varieties of frozen sausages can be cooked in the air fryer, including bratwurst and cocktail sausages.

Can You Cook Sausages from Frozen in the Oven?

Oven cooking frozen sausages is an especially useful way of cooking them if you are also oven cooking other parts of the meal.

Each type of frozen sausage will have different cooking times so ensure that you read the packet thoroughly. The sausages need to be piping hot all the way through before they are eaten.

Can You Cook Sausages from Frozen in a Slow Cooker?

Slow cookers are a great way of getting your evening meal sorted before you even leave the house in the morning. Dishes such as sausage casserole or sausage and dumplings are perfect slow cooker meals.

The good news is that frozen sausages can be cooked in the slow cooker. All that you need to do to ensure a delicious slow cooked sausage-based meal is leave them cooking for an hour longer than you would if they were fresh sausages, just to ensure they are cooked all the way through.

Can You Cook Sausages from Frozen in the Microwave?

Sausages can be cooked from frozen in the microwave, but there are a few things to be aware of if you choose to do this.

Before cooking, the sausages need to be defrosted. This can be done using the defrost function or operating the microwave at 30% power.

Once the sausages are defrosted you can then cook them in the microwave on full power until they are piping hot all the way through and are thoroughly cooked.

When microwave cooking frozen sausages, the skin will not crisp or brown like it would with other methods of cooking. 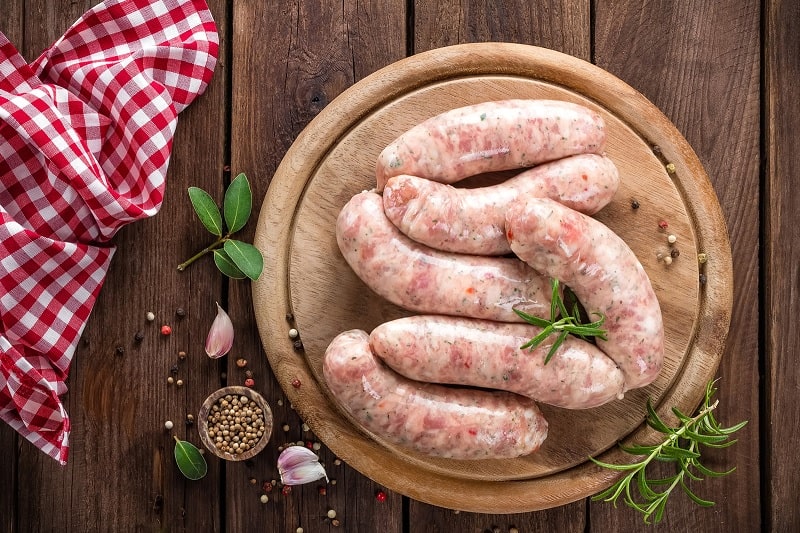 Can You Cook Sausages from Frozen if they Were Originally Fresh?

Technically you can freeze fresh sausages and then cook them from frozen. To do this though it is recommended that you cook them for longer on a lower temperature to ensure they cook all the way through without burning on the outside.

It’s important to check they are completely cooked before eating them.

It is widely considered much easier to defrost the sausages first before cooking them as this can be done in the microwave in defrost mode in just a few minutes.

Can You Cook Plant-Based Sausages from Frozen?

Vegetarian or vegan sausages are often designed to be cooked from frozen if that’s how they were bought.

It’s not recommended to defrost frozen plant-based sausages before cooking them as this can alter the texture.

Plant-based sausages carry very little risk in comparison to pork sausages when cooking but it is still best to check that they are heated all the way through and to follow packet instructions.

Frozen sausages are a versatile addition to any family’s freezer and the variety of ways to cook them from frozen with ease makes them a convenient and tasty freezer staple.