Mince is a versatile family food that can be used to make several popular lunch and dinner dishes.

As is the nature of family life, it’s easy to forget to take your mince out of the freezer the day before you need it.

So, what do you need to do if you find yourself with a block of frozen mince and a dinner to cook?

The good news is that there are a variety of ways of overcoming this.

Can You Cook Mince from Frozen in a Frying Pan?

The simple answer to this is yes! Frozen mince can be cooked in a frying pan easily and only takes a little longer than if it was fresh.

The best way to cook it is to add it to a pan on a medium-low heat and use a utensil to break up the mince as it begins to defrost.

Once the mince has separated you can brown it off as you usually would and cook as normal. This applies to bought frozen mince as well as mince that has been bought fresh and then frozen. 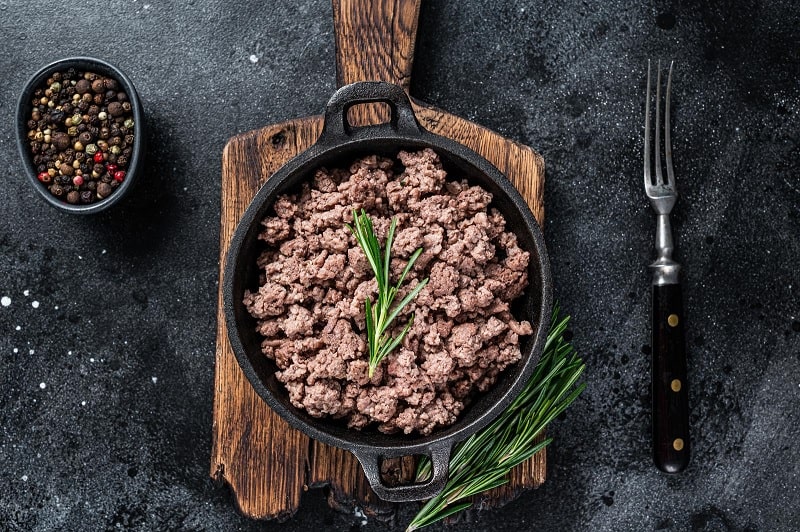 Can You Cook Mince from Frozen in the Oven?

Technically mince can be oven cooked from frozen in the oven although it may depend on what you’d like from the intended result.

If you put a block of mince in the oven it would need regular stirring and breaking up to ensure it cooks through, and you run the risk of burning the mince and making it dry.

There are many other better ways of cooking frozen mince that yield a more pleasant result.

Can You Cook Mince from Frozen in a Slow Cooker?

Slow cooking mince is a great way to infuse flavour into the mince and prepare a delicious meal in advance.

Whilst technically frozen mince would cook in a slow cooker, the low cooking temperatures mean that there’s a chance the meat will spend a long time at a temperature where bacteria can thrive, and it can be hard to know if the mince has reached a safe temperature.

The best option if you want to slow cook mince, and your mince is currently frozen, is to defrost it in the microwave first.

This can be done in just a few minutes using the defrost function or just heating the mince on 30% power. Once it’s defrosted it can be safely added to the slow cooker.

How Long Does It Take to Cook Mince from Frozen?

How long mince takes to cook can vary depending on the fat content of the meat and the type of meat used.

The best thing to do is read the packet instructions thoroughly. I3f the mince wasn’t frozen to begin with then allow a few extra minutes for it to defrost before then cooking it for the time stated in the original instructions.

Keeping mince frozen is a great way to reduce food waste and elongate the lifespan of your mince.

Frozen mince at dinner time need not equal a dinner disaster. With just a few extra minutes of preparation and cooking mince can easily be cooked from frozen.

What Is the Best Way to Cook Mince from Frozen?

Undoubtably the easiest way to cook mince from frozen is using a frying pan. This is a fast method that gets the mince cooked and hot through quickly and easily and this method works well with a lot of minced based dishes.

When using other methods, it is safer to defrost the mince first. The good news is that this can be done easily and quickly in the microwave.