Frozen peas are a kitchen staple and a great way to get your greens in. You don’t need to worry about expiration dates and you can cook frozen peas in a few minutes.

They’re also a versatile veggie that can be used as a side or thrown into many different recipes.

But can you eat frozen peas without cooking them?

Eating a few frozen peas now and again is safe for healthy adults. In fact, it’s a great way to boost your vegetable intake and they make for an ideal summer snack.

However, there are some exceptions and certain groups of people should avoid eating uncooked frozen peas. Keep reading to find out more.

Can You Eat Frozen Peas Straight From the Freezer?

You can eat peas straight from the freezer, and many people do.

Some people like snacking on them straight from the bag for a refreshing yet healthy treat.

Other websites recommend defrosting frozen peas under running water and adding them to whatever dish you’re making without cooking.

For most people, this won’t cause any stomach upset or sickness, especially if you’re eating uncooked peas in moderation.

However, frozen peas, and all other frozen vegetables for that matter, are packaged as “ready to cook” foods rather than “ready to eat”. Therefore, they’re not technically intended to be consumed without cooking.

There is a small risk of there being bacteria on the surface. Most of this bacteria is destroyed in our stomach, but to be safe you will want to cook the frozen peas before. 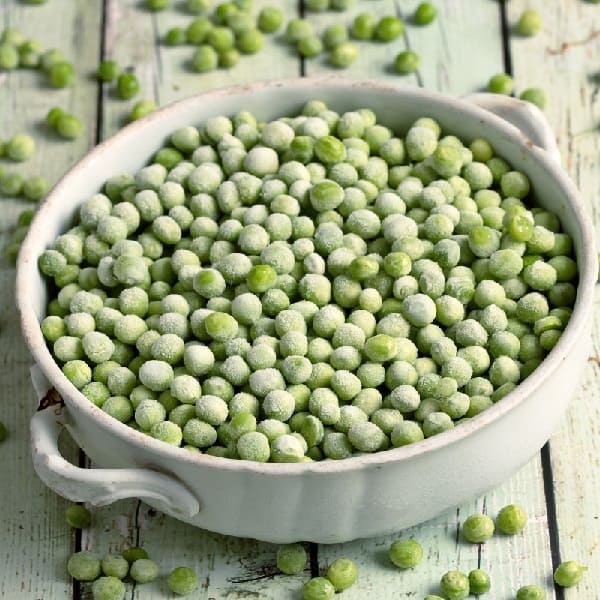 Can You Get Sick from Eating Frozen Peas?

According to the Australian Institute of Food Science and Technology (AIFST), eating frozen vegetables is safe for the majority of the adult population. This includes frozen peas, and you will have to eat a lot of them to fall sick.

This is because when vegetables are frozen, any bacteria that was on the peas before freezing will remain there in the freezer; the cold doesn’t kill the bacteria but preserves it.

Once the vegetables have thawed, the bacteria can start to multiply again. When eaten from frozen by high-risk individuals, this bacteria can lead to sickness.

Cooking destroys the bacteria and so is a much safer option for people in these high-risk groups.

With that being said, any bacteria present on the frozen peas are killed by the acid in our stomachs following consumption. This explains why healthy adults rarely fall sick from eating frozen peas.

Moreover, most vegetables that are sold frozen are washed clean of any dirt before packaging.

Plus, peas grow in pods and thus are much less likely to harbour bacteria when compared to carrots or other vegetables that grow in the ground. 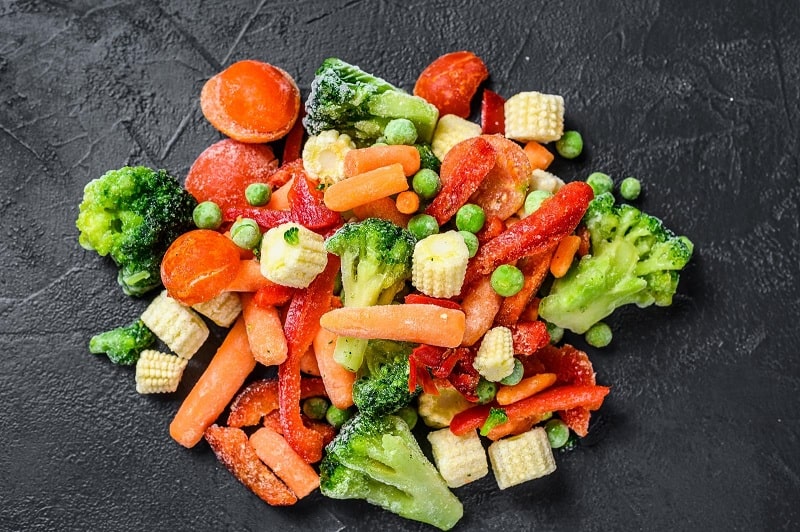 Can You Eat Frozen Vegetables Without Cooking Them?

We have established that you can eat frozen peas without any major health concerns. But what about other vegetables? Can you eat other frozen vegetables without cooking them first?

As it turns out, the answer is yes. There is nothing wrong with eating raw vegetables in moderation.

In fact, eating vegetables that haven’t been cooked actually increases the vitamin and mineral content of the food.

There are a couple of ways you can enjoy frozen veggies without cooking. You can defrost your frozen vegetables by running them under cold water for a few minutes and adding them to salads.

Or chuck a handful of frozen vegetables into smoothies just as you would do with frozen fruit.

It’s a great way to up the nutritional value and makes for an ice-cold refreshing drink. As with peas though, be cautious of doing so if you’re elderly, under five, pregnant or sick.