Range cookers are a popular choice with homeowners with larger families or those who like to cook. A range cooker combines a hob and an oven in a single freestanding appliance.

Range cookers are typically larger than most standalone ovens. They’re often 20% bigger than a standard 60cm integrated oven. They may have two ovens or separate features such as storage compartments or warming drawers.

When most of us think of a range cooker, we imagine traditional cast-iron AGA designs. These range cookers can be complicated and old-fashioned to use, and aren’t particularly energy efficient. However, there are now a huge variety of modern range cookers on the market. This includes models with the latest induction hobs which are easy to clean, modern and energy efficient.

We’ve researched the market and picked out the best induction range cookers available in the UK, which you can find below. 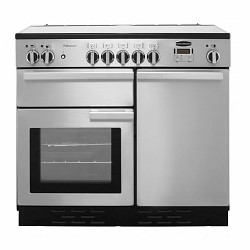 Rangemaster is easily one of the most popular manufacturers of range cookers, and with good reason. This handy range cooker has a five-zone induction hob, two oven spaces and a separate grill, giving you plenty of space to prepare even the most complex family meals.

The fan ovens offer perfectly even heat distribution across all four shelves, making it easy to cook multiple dishes in one go.

This Rangemaster cooker has triple-glazed glass in the door for better heat retention, and has a range of standard safety features to reduce the chances of burns whilst you cook.

The cooker has a smart, modern appearance that will look right at home in just about any kitchen.

Overall, users find that the hob is incredibly responsive, and both the hob and ovens produce consistent results. The hob and cavities all heat up very  quickly and are quiet during use too.

However, some people find that some components such as the control knobs feel a little bit flimsy. 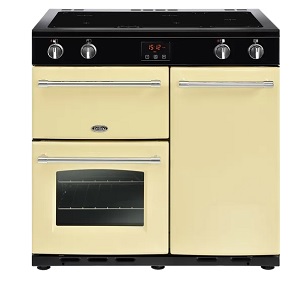 This Belling electric range cooker has plenty of style, as it is from Belling’s Farmhouse range. Still, it also packs a nice punch in the cooking department too.

To start with, this range cooker has three separate ovens. The main oven has a capacity of 58-litres, perfect for roasting joints of meats. It is also a fan oven, so heat is consistently pushed around the oven cavity, making it nice and easy to use.

You really get the best of both worlds with this range cooker. You get a timeless design that will work in any kitchen, but up-to-date, modern cooking controls and features that make this cooker energy efficient and a joy to use. 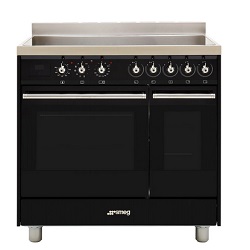 This 90cm Smeg Classic range cooker has two cavities and a handy five-zone induction hob. The main oven is multifunctional, making it easy to achieve great results whether you are baking, roasting or even grilling.

The Smeg Classic range cooker uses Smeg’s new Circulaire fan that keeps the heat level in the oven even for consistent cooking on every shelf. You can even get cooking faster as there’s no need to preheat the oven before you get started. Not only is this incredibly convenient, but it can save you money on your energy bills too.

For easy cleaning, this Smeg cooker has a pyrolytic self-cleaning mode. During this cycle, the inside of the oven is heated to a staggering 500°C which will burn away all the old food on the inside.

Whilst this range cooker performs well and has a sturdy construction, some users do find that the fan during cooking and cooling can be quite loud. 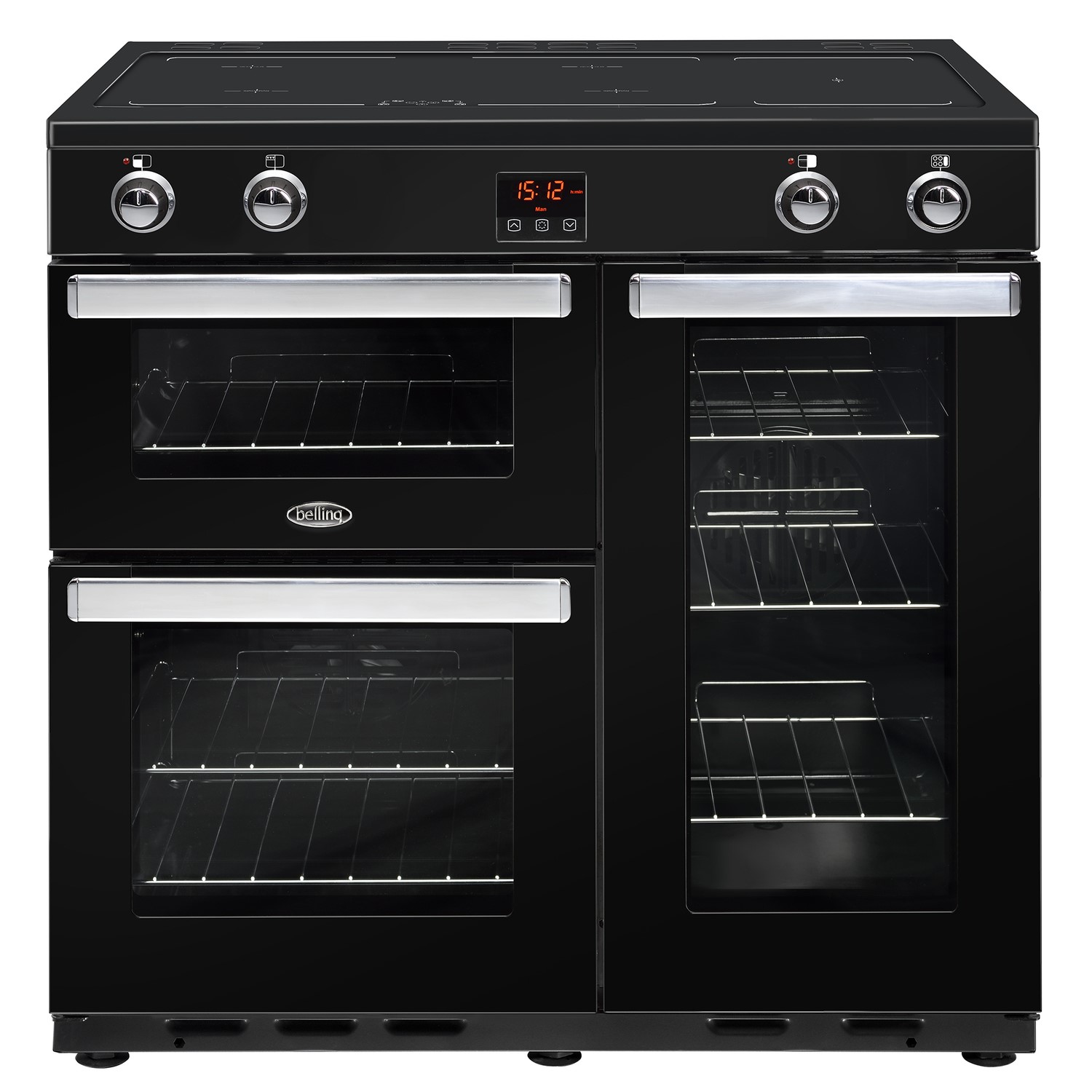 The Belling 444444080 Cookcentre 90Ei is a low to mid-range model from trusted brand Belling. This model has a 4-zone induction hob, which heats nearly twice as fast as a gas hob, and is controlled by Belling’s Link+ cooking technology.

Some users find the induction hob take a little getting used to on this model, but this stylish cooker offers good value for money, looks great and has some excellent features. 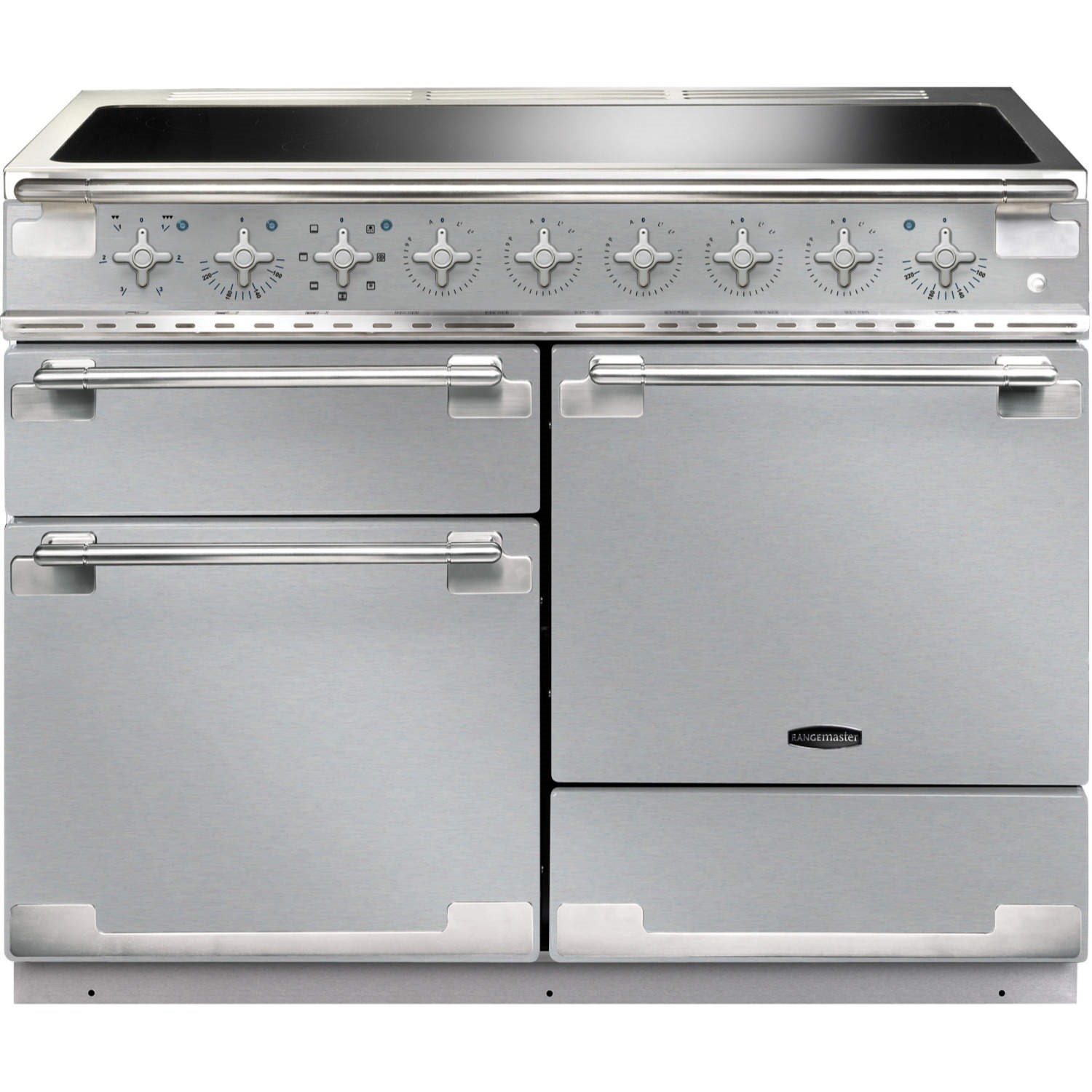 The award-winning Rangemaster 100340 Elise 110 Electric Range Cooker is perhaps one of the most high-spec electric range cookers on the market. Influenced by top European gourmet chefs, this French-inspired cooker won the Best Kitchen & Household product in 2013,

The oven has seven different built-in functions for cooking all kinds of meals, and a Handyrack storage drawer for baking trays.

The 5-zone induction hob is easy to control and has special features for simmering and child locks for safety.

The Elise 110 also has an A rating for energy and is recommended by the energy rating trust.

It’s one of the more expensive induction range cookers on the market, but you will recover some of the initial cost over time by saving energy every time you cook.

What Is an Induction Hob?

Induction hobs are different to other hobs because they directly heat the pan you are cooking with rather than just heating the hob ring.

This fast and efficient method activates a magnetic field when the hob is switched on. When a pan is placed on the hob, the circuit is complete and the base of the pan is heated up.

Induction is the fastest cooking method available on the market today and is even quicker than gas. It’s also as responsive and precise as gas, so you if you turn the heat up or down there is an almost immediate effect (unlike with old-fashioned electric hobs!).

Induction hobs are also extremely energy efficient, because you’re taking a step out of the process of heating food by heating the pan and not the ring and everything around it. They’re also easy to use and clean.

Things to Consider Before Buying an Induction Range Cooker

An induction range cooker is likely to cost more to buy initially and you may need an electrician to install it. However, the energy saved from using an induction hob will help you recover the extra cost if you use your cooker regularly.

You’ll also need to use pans that are suitable for induction pans. These include iron, stainless steel, enamelled steel and some aluminium pans if they have a suitable ferromagnetic base.

Never use pans with a copper or glass base on an induction hob. If in doubt, check the manual for your cooker to see which pans are suitable.

If we had to pick just one induction range cooker to recommend to most people, it would be the Rangemaster Professional Plus PROP100EISS/C since it offers plenty of space to prepare complex family meals, has great heat distribution and retention and boasts an incredibly responsive five-zone induction hob.

If having an induction hob isn’t so important to you, see our roundup of the best range cookers on the market.